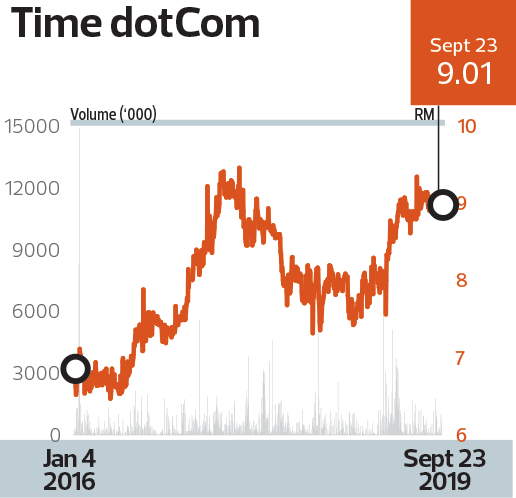 In an increasingly challenging telecoms landscape, Time dotCom Bhd stands out in terms of the returns it has delivered over the past three financial years.

It is an outstanding performance compared with that of its peers; all four of them — Telekom Malaysia Bhd, Axiata Group,

Underlying the returns is the company’s strong financial performance despite intensifying competition in the saturating Malaysian market.

It must be noted, however, that Time dotCom’s business model is more insulated compared with that of its peers, as it focuses on fixed-line telecommunication products, such as data and voice, and international bandwidth provision, which includes the submarine cable and data centre businesses.

In comparison, its peers are in more competitive segments such as wireless cellular service, which has seen margins eroding substantially in recent years.

Driving the momentum is, among others, strong sales growth from its data and data centre segments, both of which clocked double-digit growth annually between FY2016 and FY2018.

Data, in particular, is the key revenue driver for Time dotCom, contributing about three-quarters of its annual turnover.

While the Malaysian home market remains its core earnings source, accounting for more than 96% of revenue in FY2018, the company has also ventured abroad to diversify its revenue stream.

In FY2017, it acquired 46.84% equity interest in public listed Thai telecommunication network and service provider Symphony Communication PCL. In the following financial year, it established an operating presence in Japan and Cambodia, according to its latest annual report.

However, it is still early days for the overseas diversification, given that ex-Malaysia revenue in FY2018 came to just RM35.65 million or about 3.62% of total turnover.

And there may yet be upside. On Aug 28, RHB Research reiterated its “buy” call with a target price of RM10.90 for the stock, implying nearly 20% in upside potential still on the table.