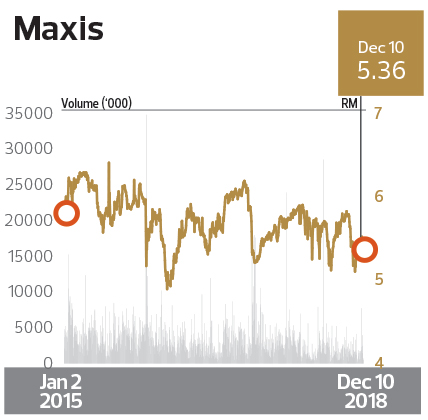 Despite the fast-growing digital economy that is expected to benefit telecommunications companies (telcos), the pressure on earnings from rising capital expenditure in the intensely competitive industry has hurt most of them.

In the same period, Maxis recorded an impressive adjusted weighted return on equity of 50% for its shareholders — the highest among super big cap companies (above RM40 billion market capitalisation), although not the highest among its peers in the telecoms sector.

In 2017, the company’s capital expenditure (capex) stood at RM1.03 billion, which was mainly for investment in network capacity expansion. This was in line with the growing demand for data usage, as seen by the record-high number of 4G LTE users of 6.2 million in 2017 compared with about 4.6 million in 2016.

The group expects its service revenue to decline by low single digits, with earnings before interest, taxes, depreciation and amortisation (Ebitda) declining in mid-single digits. As for capex in 2018, Maxis projects it to be about RM1 billion while cash flow, excluding upfront spectrum assignment fees, is expected to be at a similar level as in 2017.

In the first nine months of its financial year ended Sept 30, 2018 (9MFY2018), the group’s performance was in line with its projection. Revenue fell 4.2% year on year to RM6.75 billion while service revenue declined 3.4% to about RM6.02 billion due to a drop in the prepaid business, thus offsetting the growth in the postpaid and home-fibre businesses.

Postpaid service revenue grew to RM3.02 billion in 9MFY2018, supported by a solid subscriber base that exceeded three million. Maxis added 250,000 new subscribers during the period in review while average revenue per user (ARPU) remained high at RM93 per month.

In contrast, its prepaid service revenue declined 13% to RM2.55 billion in 9MFY2018, mainly due to a lower subscription base on the back of continued SIM consolidation, migration to postpaid and intense price competition. ARPU remained decent at RM41 per month.

As with most telcos, Maxis’ share price got hit, tumbling 7.6% in the last one year. It closed at RM5.36 last Monday (Dec 10). Nevertheless, it was still one of the better performers during the period in review.

The negative sentiment in the industry, however, has hurt investor confidence in the stock as seen by most analyst recommendations to sell or hold it. According to Bloomberg data, there were no “buy” calls on Maxis at the time of writing while 14 had recommended a “hold” and 13, a “sell”. Their target prices ranged from RM4.70 to RM5.95 while the average 12-month target price was RM5.39 — a shade above its closing price of RM5.36 on Dec 10.

Among the Super Big Cap companies or those with a market capitalisation of over RM40 billion at least, Maxis ranked high in terms of return on equity (ROE) during the award evaluation period of FY2014 to FY2017.