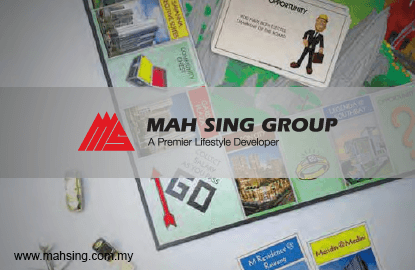 Mah Sing said it achieved property sales of RM1.6 billion for 9MFY15, due to products that are in line with the current market demand, which is focused on affordability.

"As at Sept 30, 2015, a total of RM30.62 billion comprising unbilled sales of approximately RM4.75 billion, combined with remaining gross development value of RM25.87 billion, is expected to sustain the group's revenue growth over the next eight years," it added.

Revenue for 3QFY15, however, gained 8% to RM770.74 million, from RM713.55 million in 3QFY14, due to better performance from its property development and plastics segments, it told the stock exchange in a filing today.

"Backed by a diversified portfolio of 35 ongoing projects that are mainly focusing in Greater KL and the Klang Valley and well spread-out throughout different stages of project lifecycle, the group is positioned to continue its earnings delivery," it said.

In the pipeline to drive sales prospects, are new releases of affordable landed homes in Meridin East, Pasir Gudang, Johor (from RM350,000) and Cerrado serviced apartments in Southville City @ KL South (from RM388,000), it added.

Shares in Mah Sing fell two sen or 1.39% to close at RM1.42 as at midday break today, for a market capitalisation of RM3.42 billion.