Higher earnings seen for Eversendai in FY15 and FY16

Eversendai Corporation Bhd
(May 29, RM0.74)
Upgrade to buy with an increased target price of RM1.28 from 78 sen previously. Stripping out the one-off revaluation loss on financial instrument of RM6.4 million, the first quarter financial year 2015 (1QFY15) normalised profit after tax and minority interest was commendable at RM25.8 million and with an improved margin of 6.4%.

Earnings surged 150% on-year and were above our and consensus’ estimates.

The company continued its impressive performance since 4QFY14 with a significant increase in revenue to RM402.8 million.

The increase was largely

attributed to higher progress billings from ongoing construction of steel fabrication and erection projects in the Middle East region of RM187.7 million mainly from jobs on two units of “GustoMSC NG-2500X” liftboats in

Other contributors were the Tanjung Bin 4 coal-fired power plant contract and PKT Logistics Warehouse projects in Malaysia and higher contract value in India of RM88.8 million.

As progress of ongoing projects is moving into advanced execution stage of construction works, we expect the strong earnings momentum to continue over the next three quarters.

Therefore, we revise both our FY15 and FY16 earnings forecasts higher by circa 80% to account for higher progress billings and improvement in its operating profit margin.

At current level, we believe that market has yet to price in the outstanding works of RM2 billion and thus we view the stock as deeply undervalued with a potential upside of 81%.

We are positive on its growth prospects with the group potentially securing contracts for projects in the Middle East preparation for Dubai Expo 2020, Qatar World Cup 2020 and world-class stadium developments in Saudi Arabia.

In addition it could also land the subcontract jobs for KL118 Tower and Refinery and Petrochemicals Integrated Development project in Pengerang,  Johor and roll out more projects by India’s new government. — MIDF Amanah Research, May 29 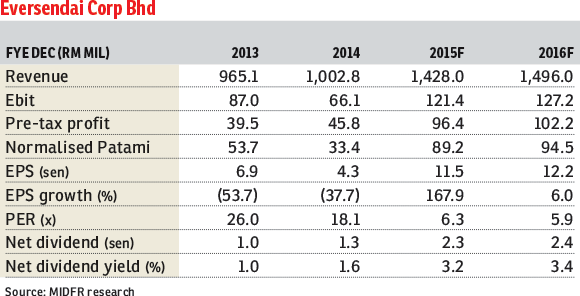