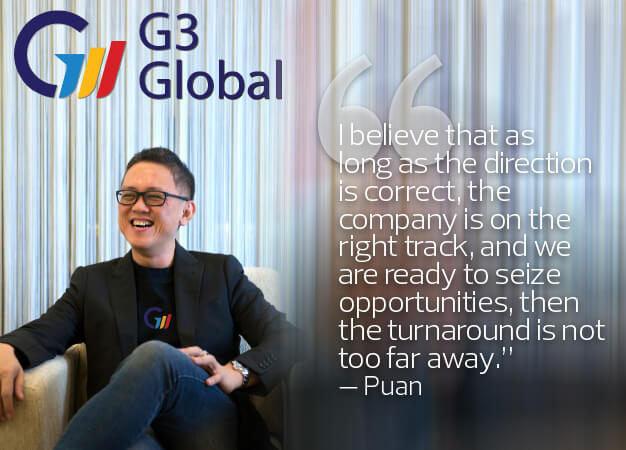 TECHPRENEUR Puan Chan Cheong claims to have created a tech unicorn in Malaysia when Green Packet Bhd — a company he founded in 2000 — achieved a valuation of RM3 billion in 2007.

The term “unicorn” to refer to start-ups valued at more than US$1 billion was first coined by venture capitalist Aileen Lee in 2013. The world’s most valuable unicorns include the likes of ride-sharing firm Uber Technologies Inc, Chinese electronics and software company Xiaomi Inc, and online lodging company Airbnb Inc.

Green Packet — whose market capitalisation has fallen to RM263 million today — seems to have a long way to go to return to its glory days. However, there are big plans for its 32%-owned associate G3 Global Bhd.

G3 Global, a loss-making clothing retailer and Internet-of-Things (IoT) solutions provider, was listed on the Main Market of Bursa Malaysia in 2004 as GA Blue International Bhd. It subsequently changed its name to Yen Global Bhd, and since May this year, has been known as G3 Global.

“We created the first unicorn when Green Packet achieved a RM3 billion market cap within seven years. My expectations are high for G3 to break Green Packet’s record. The business has what it takes to make such an attempt,” Puan tells The Edge in an interview.

The shares of G3 have gained 61% to 75 sen apiece year to date, giving it a market capitalisation of RM309 million. For it to become a unicorn, its market cap would have to grow at least 13.7 times, based on today’s exchange rate.

Green Packet, where Puan is now a director, is the single largest shareholder of G3 with a 32% stake, after surfacing as a substantial shareholder with a 22% stake in August last year.

Puan was appointed non-executive chairman of G3 just last month. The 49-year-old techpreneur is expected to help steer the company in the right direction during its transition phase as the jeanswear maker diversifies into ICT.

“I take this role very seriously. I can see why they appointed me with my skill set and experience in the tech sector, and perhaps more importantly, to bring in a new mindset that is required for the tech business,” he says.

From jeanswear maker to IoT player

Founded in 1992, G3 is primarily involved in the apparel business. Among the fashion brands it distributes are Edwin and Mustang jeans.

The company has a wide distribution network of 300 retail outlets and 12 boutique stores nationwide, and owns a manufacturing plant in Bayan Lepas Industrial Park, Penang.

However, its apparel business has been incurring losses since 2010, with the exception of 2013, because of intense competition and weak consumer spending.

Atilze, now the ICT arm of G3, is an IoT services solution provider, as well as supplier of IoT and connected objects hardware devices. It also delivers cloud-based data-driven applications and services for connected cars.

“Imagine, millions of objects will be connected with microsensors. It is no wonder that the International Data Corp (IDC) forecasts the industry will be worth a mind-blowing US$1.7 trillion by 2020. Now, it is up to industry players like Atilze to explore and create value for end users to enable a digital lifestyle like never before,” says Puan.

Atilze is showing healthy traction with over RM10 million in revenue last year, and this is expected to grow at a double-digit percentage this year. In terms of bottom line, however, Atilze is only expected to start contributing to the group next year.

Puan adds that G3 is expanding its business via diversification and has strong support from its two new strategic shareholders — Green Packet and Gemtek Technology Corp.

Taiwan-listed Gemtek — a global provider of wireless broadband solutions and IoT player with an annual revenue of over US$1 billion — is the second largest shareholder of G3 with a 30% stake.

The third largest shareholder, with a 21.82% stake, is the Goh family, which has expertise in the apparel business.

Puan says going forward, members of the Goh family and the existing team will take care of the apparel business, while the new IoT business will be driven by a new team under Puan.

Since its diversification into the ICT space, G3 has inked distribution partnership agreement with Gemtek, and collaborated with Cyberview Sdn Bhd to build Cyberjaya as the first Smart City in Southeast Asia.

It is also partnering Axiata Group Bhd to deliver market-relevant IoT solutions, and teaming up with U Mobile Sdn Bhd to provide 3G and 4G LTE connectivity for connected cars.

It financial year end was changed to Dec 31 this year, so the next set of financial statements will cover a period of 17 months.

According to Puan, G3 should return to profitability “soon enough”. “We are cautious, but at the same time, confident of delivering the bottom line. Atilze has to become profitable, but I don’t want to jump in and say when for sure. I believe that as long as the direction is correct, the company is on the right track, and we are ready to seize opportunities, then the turnaround is not too far away.”

While G3 and Green Packet are both involved in IoT, Puan stresses that there is no duplication of resources and unhealthy competition between the two companies.

Instead, there is a potential to become “extremely synergistic” as Green Packet is principally involved in connectivity devices and communications, while Atilze is an IOT services solution provider with an IOT platform.

“We can imagine lots of opportunities for Green Packet to support G3 by providing IoT devices and hardware. We are also building a big data collection and analytic platform (software) that connects multiple IoT devices,” he explains.

For instance, the connected car platform will have the capability to collect data on engine condition and driving behaviour, which will be very useful for the auto and insurance industries.

“It can even provide predictive maintenance, using real-time diagnostics, for the car. Car buyers would have an app that alerts them of car engine problems. These are precursors to autonomous cars,” he says.

It is worth noting that this is Puan’s first interview since he left webe in July last year and took time off from the corporate scene.

“I’ve had a very exciting 25-year journey from the time I started my own business in 1992 until I got my first and last job in webe in 2016. After all my experiences dealing with the ‘outside’ world, I thought it was time for me to take a little pause and look inward,” he says.

A Buddhist, he travelled to the Himalayas from October to December last year, during which he went on a pilgrimage to Lumbini in Nepal, trekked to the Everest Base Camp, and visited Bodh Gaya.

“It was an extremely enriching experience. I spent a lot of time reading and meditating on the highest plains on earth. I even sat under the bodhi tree,” he says.

The spiritual journey reaffirmed a lot of things he believes in and gave him new insights and understanding.

“I received so much positive energy and felt so serene and at peace. Of course I missed my family, but it was all worthwhile. I would suggest that everyone allocates time for body, mind and soul. You’ll come back more effective, wiser and looking forward to the future,” he says.