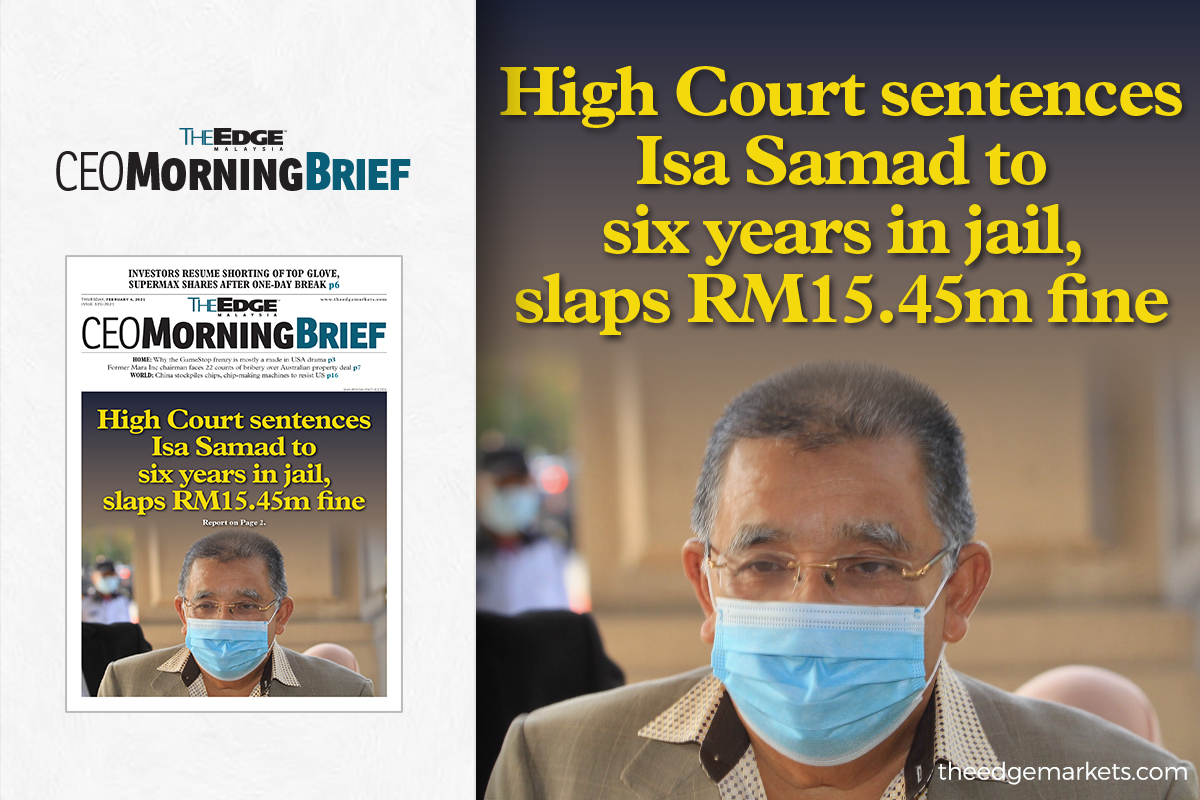 If Mohd Isa’s appeal against his conviction is set aside and that the accused fails to pay the RM15.45 million fine, he will have to face an additional 18-year jail sentence.

KUALA LUMPUR (Feb 3): Former Federal Land Development Authority (FELDA) chairman Tan Sri Mohd Isa Abdul Samad, who was found guilty by the High Court this morning of nine corruption charges involving RM3 million, was sentenced to six years in jail and fined RM15.45 million. Mohd Isa was, however, granted a stay of execution of his sentence, pending an appeal by the accused.

According to Justice Mohd Nazlan, if Mohd Isa’s appeal against his conviction is set aside and that the accused fails to pay the RM15.45 million fine, he will have to face an additional 18-year jail sentence. Justice Mohd Nazlan, when reading out his judgement on Mohd Isa’s case today, said Mohd Isa’s defence was a mere denial and that the defence had also failed to raise reasonable doubt against the prosecution’s argument.

“With this, the court found that the prosecution had succeeded in establishing the case beyond reasonable doubt against the accused.

According to Justice Mohd Nazlan, Mohd Isa’s defence was an afterthought, inconsistent and baseless.

Justice Mohd Nazlan said Mohd Isa had failed to rebut his charges under Section 16 (a)(A) of the MACC Act 2009.

It was reported that Mohd Isa, who is a former director of Felda Investment Corp Sdn Bhd (FIC), was charged with nine counts of bribery amounting to RM3.09 million involving the RM160 million acquisition of Merdeka Palace Hotel and Suites in Kuching, Sarawak.

According to news reports, Mohd Isa was accused of receiving the RM3.09 million bribes in nine tranches between July 21, 2014 and Dec 11, 2015 from Ikhwan Zaidel, who was then a director at Gegasan Abadi Properties Sdn Bhd.

It was reported that Mohd Isa was accused of receiving the money from Ikhwan through Muhammad Zahid Md Arip for helping to approve the hotel purchase by FIC.

Muhammad Zahid is a former special officer to Mohd Isa.

It was reported that Mohd Isa’s offences were committed at Level 49, Menara FELDA, Platinum Park, No 11, Persiaran KLCC here.

The trial for Mohd Isa’s nine corruption charges started on Oct 8, 2019. Since then, 22 prosecution witnesses and six defence witnesses, which included Mohd Isa himself, testified in the trial.

On June 16, 2020, the High Court here acquitted Mohd Isa of one criminal breach of trust (CBT) charge but ordered him to call for defence on the nine corruption charges involving RM3.09 million.

The CBT charge also involved the acquisition of the Merdeka Palace Hotel and Suites in Kuching, Sarawak.

Justice Mohd Nazlan then ordered Mohd Isa to enter into his defence on the nine graft charges as there was sufficient credible evidence to establish the ingredients of the offence of receiving gratification.