The sales volume in the trading unit grew 48% y-o-y, but revenue only rose 35%, as its average selling price fell from intensified competition in the market. Revenue from its manufacturing division slipped 1.2% y-o-y (RM146.9 million in 1QFY15 vs RM148.8 million in 1QFY14).

The sharp decline in net earnings was mainly due to the share of the RM5 million loss booked by its jointly-controlled entity, Eastern Steel Sdn Bhd, which had contributed RM2.9 million in earnings in 1QFY14. The significant change in the performance for the period  under review was mainly due to the forex impact, as the US dollar strengthened against the Malaysian Ringgit.

We earlier expected FY15F to be a consolidation year for Hiap Teck as Eastern Steel’s blast furnace plant will incur start-up losses. Nonetheless, the recent significant strengthening of the dollar against the ringgit may widen the share of losses as Eastern Steel has US dollar-denominated borrowings. We expect the trading and manufacturing divisions to remain stable, but Eastern Steel may impact its overall performance. Thus, we trim our earnings forecast for Hiap Teck’s FY15F and FY16F by 11% and 10% respectively, as we incorporated wider losses from its jointly-controlled entity (RM22 million in FY15F vs RM15 million previously, and RM8 million in FY16F vs RM5 million previously).

We pare down our TP to 72 sen (from RM1.00) as we revise our earnings forecast and lower our P/BV to 0.52 times (from 0.72 times) to reflect the currently negative sentiment in the market.

We maintain our “buy” recommendation as we continue to like its prudent management and the fact that it could benefit from impending infrastructure projects in the nation, moving forward. — RHB Research, Dec 18 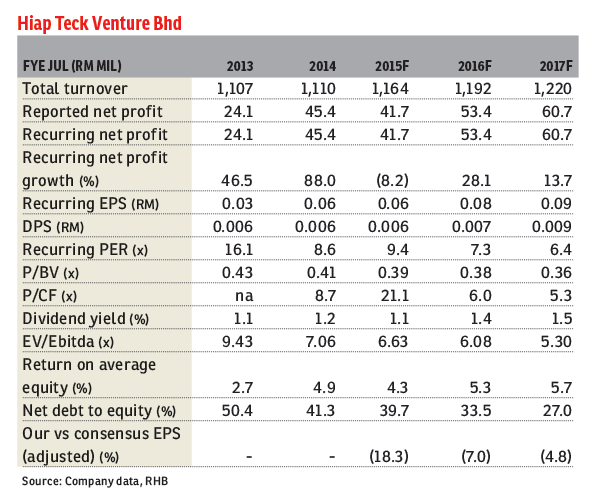