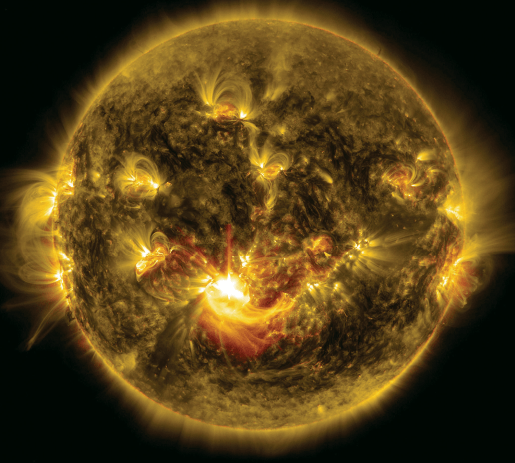 COULD the Sun be your lucky — or unlucky — star?

In an unusual study published yesterday, Norwegian scientists said people born during periods of solar calm may live longer, as much as five years on average, than those who enter the world when the Sun is feisty.

The team overlaid demographic data of Norwegians born between 1676 and 1878 with observations of the sun.

The lifespan of those born in periods of solar maximum — interludes marked by powerful flares and geomagnetic storms — was “5.2 years shorter” on average than those born during a solar minimum, they found.

“Solar activity at birth decreased the probability of survival to adulthood,” thus truncating average lifespan, according to the paper published in the journal Proceedings of the Royal Society B.

There was a stronger effect on girls than boys, it said.

The Sun has cycles that last 11 years, give or take, from one period of greatest activity or solar maximum, to the next.

Solar maxima are marked by an increase in sunspots, solar flares and coronal mass ejections that can disrupt radio communications and electrical power on Earth, damage satellites and disturb navigational equipment.

Solar activity is also linked to levels of ultraviolet radiation — an environmental stressor known to affect survival and reproductive performance, possibly by causing cell and DNA damage, according to the study authors.

The team, from the Norwegian University of Science and Technology, based their study on demographic data from church records of some 8,600 individuals from two different mid-Norwegian populations, one poor and one wealthy.

This was matched to maps of historical solar cycles.

On top of lifespan, being born in a solar maximum period also “significantly reduced” fertility for women born into the poor category, but not for wealthier women or for men, said the authors.

“We show for the first time that not only infant survival and thus lifespan but also fertility is statistically associated with solar activity at birth,” they wrote.

It was not clear whether the same would necessarily hold true for people born in the modern era.

One explanation could be ultraviolet-induced degradation of the B vitamin folate, a shortage of which before birth has been linked to higher rates of illness and death, the team theorised.

“Our findings suggest that maternal exposure to solar activity during gestation can affect the fitness of female children,” the authors wrote.

“The effect of socio-economic status on the relationship between solar activity and fertility suggests that high-status pregnant women were better able to avoid the adverse effects of high solar activity” — possibly by staying out of the Sun or because a healthier diet curbed the harm.

The team did not have data about how early or late into a solar maximum event the children were born — a limitation of the study.

And they could not fully distinguish between pre- or post-natal exposure to ultraviolet light.

Further investigation is needed, they said, to test whether the results were repeated in people of different skin colours, and those living at different latitudes.

“This study is the first to emphasise the importance of UVR (ultraviolet radiation) in early life,” the authors said.

“UVR is a global stressor with potential ecological impacts and the future levels of UVR are expected to increase due to climate change and variation in atmospheric ozone.” — AFP