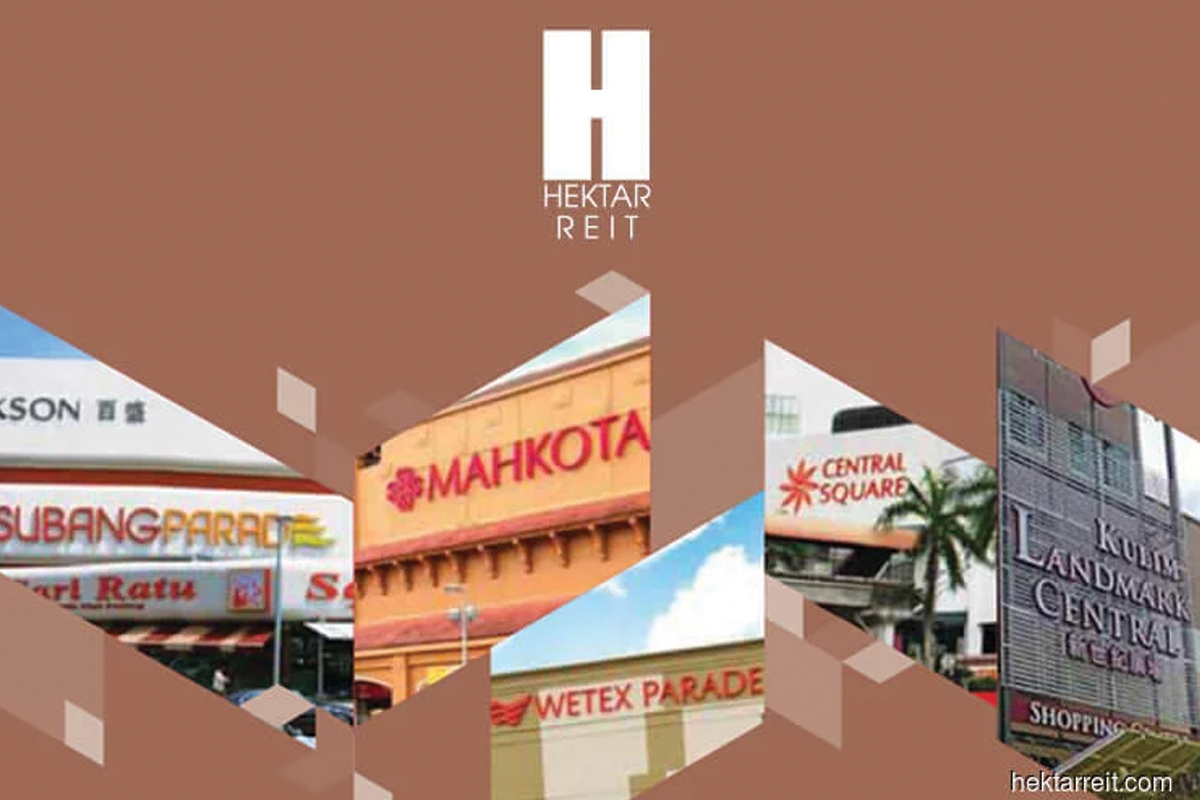 HEKTAR Real Estate Investment Trust (REIT) is being streamlined to improve operational efficiencies, enhance liquidity and increase footfall across the retail malls in its portfolio, which is showing more evident recovery in secondary cities even as operating costs creep up.

These plans will be carried out under the leadership of Johari Shukri Jamil, who was previously group vice-president in the industrial development division of state-owned Johor Corp prior to his appointment as non-independent, non-executive director at Hektar REIT in February. He was subsequently appointed as executive director and CEO in June, replacing Datuk Hisham Othman.

“It has been a challenging time [dealing with] interest rate hikes and the mandate to implement the minimum wage policy. For operations at the mall level, for instance, remuneration of less than 20% of the in-house staff has been adjusted in accordance with the minimum wage and, similarly, this has also increased the cost of our outsourced contractors such as cleaning and security. However, we have been proactive in mitigating the impact by undertaking various revenue and cost optimisation initiatives,” Johari tells The Edge at the REIT’s headquarters in Kuala Lumpur.

He explains that in the short term, Hektar REIT intends to “improve operational efficiencies such as internal processes to improve its top line and net property income (NPI), while enhancing its liquidity via corporate exercise(s) and prudent capital management”.

It is also strengthening the mall operator’s core departments such as leasing and marketing, for which the company has brought in an “experienced director”, as well as enhancing mall activities to increase footfall, and also refreshing the condition of its malls. “In the long term, our strategic plans will see Hektar REIT acquiring yield-accretive assets, improving its overall gearing ratio and improving overall business sustainability,” says Johari. Hektar REIT is solely a retail player with six neighbourhood and regional malls in its portfolio — Subang Parade and Segamat Central in the Klang Valley, Mahkota Parade in Melaka, Wetex Parade in Johor, and Central Square and Kulim Central in Kedah.

“Shoppers have returned to [our] malls, which is reflected in our second-quarter footfall and vehicle count figures, which increased 58% and 50% year on year respectively. At Mahkota Parade, for instance, we have seen 101% y-o-y improvement,” says Johari, adding that Hektar REIT’s occupancy rate had never dipped below 90% except for the pandemic period.

He also points out that recovery is more evident in secondary cities, with occupancy rates at Central Square, Wetex Parade and Kulim Central recording above 85%, and the latter close to 95% in June.

Wetex Parade, Kulim Central and Segamat Central are the only malls in those towns.

“Footfall in the first half came up to nine million, after 13 million in 2021. We are targeting to reach 19 million by the end of the year,” says Johari.

Mahkota Parade (MP) is the largest contributor to group revenue, with Subang Parade coming in second as of June 30.

“Weekly events — especially over the weekend such as fashion shows, performances by artistes and pet animal shows, all of which we’ve introduced recently — have helped to increase footfall. We will be carrying out more of these activities,” he says, adding that casual leasing in its malls contributed less than 10% to the group’s top line as of June 30.

“Meanwhile, for some of the tenants, sales have recovered by more than 90% to pre-pandemic levels, which is also a reflection of visitor footfall returning to our malls,” he adds.

Currently, the mall operator is reconfiguring the tenancy mix at its malls for optimisation of space.

“We are targeting an average occupancy rate of 87% by year end. That is a prudent goal as we anticipate to do better. We are focusing on customer engagement via targeted marketing campaigns through physical and digital platforms to encourage spending and longer dwell time, as well as increasing visitations per customer,” he explains.

Johari observes that food and beverage, department stores and electronics and IT were the sectors that recovered the fastest and performing well after the pandemic, while grocers, supermarkets and jewellery performed well at Hektar REIT’s malls during the pandemic.

He adds that occupancy costs for tenants have increased by 60% compared with pre-pandemic rates. Earnings per unit rose by 309.1% to 1.4 sen during the period compared with last year. Based on that, Hektar REIT has proposed an interim income distribution of 2.7 sen per unit, amounting to RM12.72 million to be paid on Sept 26.

Hektar REIT’s gearing — previously at 44% — increased to 46.2% and 47.2% in the last two years, inching closer to the temporary gearing limit of 50% to 60% which the Securities Commission Malaysia allowed Malaysian REITs from Aug 12, 2020, until Dec 31, 2022, to provide greater cash flow flexibility in view of the operating challenges wrought by the pandemic.

Johari says the company’s short-term goal is to lower its gearing to below 45%, and eventually below 40% as part of its long-term goal in the next two to three years.

“Focusing on aspects of the business such as increasing occupancy rate will improve our NPI and liquidity levels. Much also depends on the [re]valuation of our assets, which — along with other REITs — were hit during the pandemic,” he adds.

He says the company is committed to maintaining a distribution policy of at least 90% of its realised income.

According to Hektar REIT’s 2021 annual report, it had close to 5,500 unit holders at the end of last year.

In November 2021, it proposed to undertake a private placement of up to 23 million new units, representing up to 5% of its total issued units of 461.96 million, to raise up to RM11.78 million for the group’s working capital and capital work in progress.

The proposed private placement was expected to have been completed by the first half of 2022, but its implementation has been extended to Nov 23.

“The private placement was primarily undertaken to enhance liquidity for acquisition[s] and refurbishment for [our] malls. It is also to help to pare down our debt by year end,” Johari explains.

He says Hektar REIT will continue to look out for “stabilised” and “turnaround” acquisitions of retail properties. Ideally, these are leaders in respective markets with well-positioned tenant mix, or mature malls (at least 10 years old) with untapped and underserved markets.

“Historically, we have always funded our acquisitions through a balanced mix of equity and debt. We have always been focused on neighbourhood retail assets. We will continue to pursue this strategy as it is proven to be defensive in nature, and provides stable and secure streams of income,” he adds.

When asked whether the REIT may diversify from operating retail malls in its portfolio, Johari says the trust is open to the idea, but declines to comment further.

Units in Hektar REIT, which dipped to a record low of 45 sen earlier this year, climbed 31% to 59 sen last Wednesday, valuing the REIT at RM275.8 million.