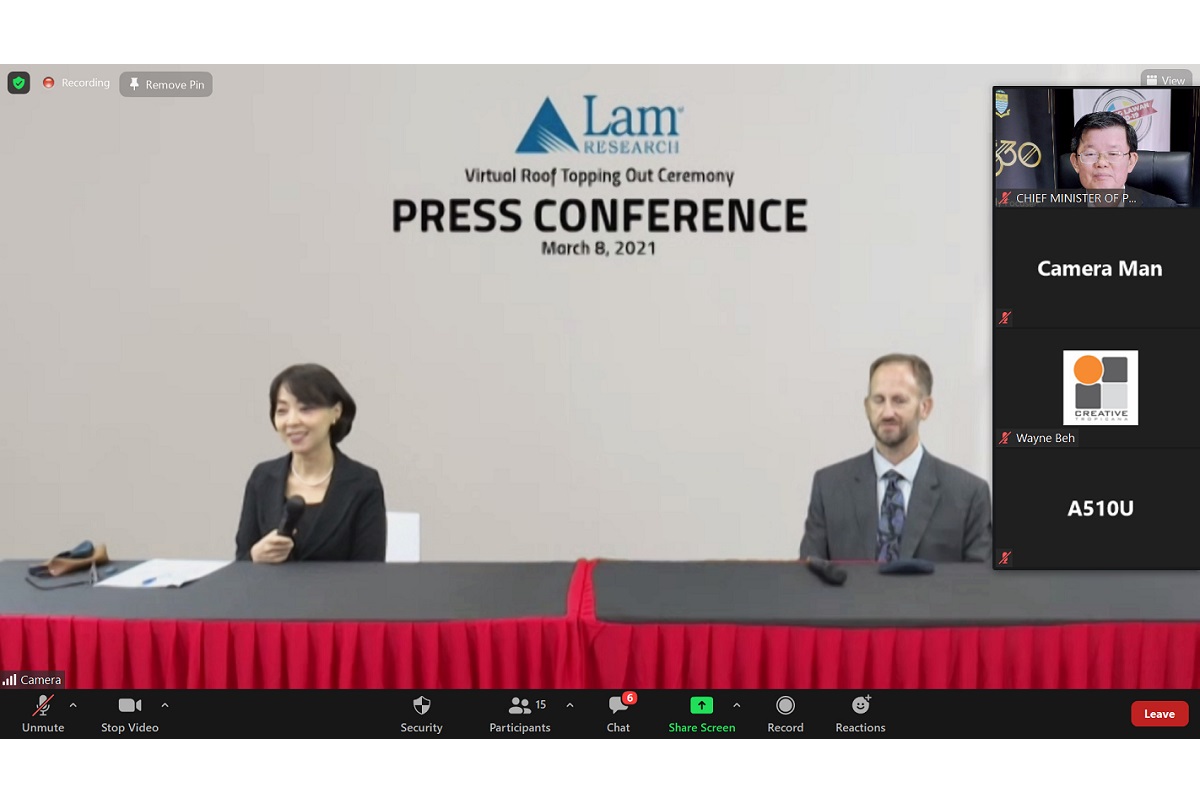 KUALA LUMPUR (March 8): Semiconductor equipment manufacturer Lam Research Corp is expecting the current heightened demand for semiconductor chips to continue in the long term as technology becomes increasingly involved in more aspects of life, and sees its new factory in Batu Kawan, Penang, helping it to address this greater demand.

At a press conference following Lam Research’s Virtual Roof Topping Out Ceremony, Lam Research Corp manufacturing corporate vice president Mike Snell noted that in the past year, the group has doubled its staff headcount and increased its supply chain purposes, and has been driven to expand beyond its Batu Kawan manufacturing facility.

“We see this demand continuing to increase for the long term. Our decision to invest in Malaysia is timely and will prove to be the right strategy.

“It has been an extraordinary challenge to grow at this rate, with so much headwind. We have found a way, as have our suppliers and have benefited from extraordinary partnerships between the federal and state governments here in Malaysia,” Snell opined.

He noted that the semiconductor industry has seen an extraordinary amount of growth and that no one could have anticipated how the development of work-from-home or remote working arrangements would drive demand.

Snell added that this heightened demand has offered new opportunities for the wafer fabrication equipment and services provider’s current and new suppliers and that Lam Research had to expand its supply base quite rapidly with partners that can help meet the needs of its end-customers.

“This presents a fantastic opportunity over the next couple of years where there is still a forecast for robust growth,” he said.

The new factory in Batu Kawan will be the group’s largest manufacturing facility, among its existing facilities in the US, Austria, South Korea and Taiwan.

To put this into context, Lam Manufacturing Malaysia general manager and senior director Soon K Kuek said its upcoming Batu Kawan facility, which is on schedule to open in the middle of 2021, will be larger than its two currently largest manufacturing facilities combined, both of which are located in the US.

She noted that a significant portion of its components come from local partners but declined to provide further specifics in percentage or value terms.

“The reason that we do not want to put a lot of focus on the exact numbers [is] we do not want people to lose sight of the other additional material benefits from this.

“Material cost in percentage spend is one thing, but what this number does not represent is the number of job opportunities that this local sourcing will create, or the knowledge transfer, the talent development and adding to the vibrancy of the already very robust supply chain," Soon said.

Snell also added that the group intends to further grow its existing supply base in Malaysia, and expects total supply share to grow from Southeast Asia — especially Malaysia — due to the rapid growth of the industry.

Additionally, Soon also announced that selected vendors will be chosen to participate in a vendor development programme.

These vendors should have a basic understanding of the semiconductor industry, display flexibility and agility, and have shared values, she said.

Snell added the group was looking beyond its traditional semiconductor partners and into fields such as the aerospace and medical devices industry.

In February last year, Lam Research announced that it would be spending RM1 billion to build the factory, which is located on 138ha of land in Penang. It aims to create 350 high-value jobs when it opens.