He’s the real fraud, Morais brothers slug it out in the open 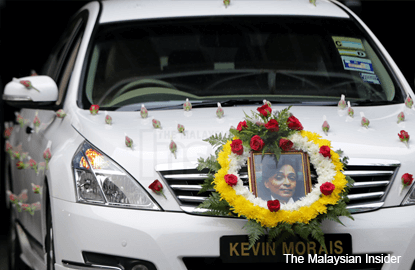 (Nov 27): The feud between the brothers of murdered deputy public prosecutor Anthony Kevin Morais escalated with Datuk Richard Morais calling his older brother Charles a "fraud", a day after Charles called him a "crook" and accused him of helping to cover up Kevin's murder.

Richard told The Malaysian Insider that Charles was being investigated for tax evasion in the United States four years ago.

"Google Charles Morais and read everything about his criminal activities in the United States, from there the people of Malaysia can judge him right away," he said in a text message.

An Internet search returned a report on news portal LancasterOnline, which said Charles was the CEO of Kronos Hotels and Resorts, a thriving hotel empire, when it first showed signs of going bust in 2007. He was later pursued for tax evasion, and sued by unpaid vendors and lenders.

Charles, who is based in Atlanta, Georgia, caused a stir on Wednesday when he released an 18-page statutory document (SD) alleging that Kevin's murder was linked to a charge sheet he was preparing against a "high-ranking government official".

Charles said Kevin had given him a pen drive, now in safekeeping in the US, containing information on the cases he was working on and who was being investigated.

Inspector-General of Police Tan Sri Khalid Abu Bakar has warned Charles to back his allegations with proof and to share his information with the police, while Attorney-General Tan Sri Mohamed Apandi Ali called his claims "preposterous".

"We know who is Charles Morais and his background. We know what transpired when he went to the US. So, I want to remind him not to make baseless accusations," Khalid said.

Richard told The Malaysian Insider that police should arrest Charles for making wild accusations through his SD.

"I also feel that the police should pick him up soon and carry out an investigation about his wild accusations and charge him if he is found to be a fraud."

In making public the SD, Charles said Richard was a "crook", who would do anything for money.

This was after Richard had claimed Kevin's body from the Kuala Lumpur Hospital mortuary without telling any family member, on the same day Charles filed an application in court for a second post-mortem.

Charles had said he was very surprised that the authorities at the KL Hospital and the police appeared to have been complicit in allowing Kevin's body to be removed from the mortuary by Richard, when they were both fully aware that he (Charles) wanted a second post-mortem to be conducted.

He also accused Richard of being in cahoots with "someone" who was "controlling this game of chess" involving Kevin's murder.

He said the late Kevin had been estranged from his two youngest brothers Richard and David, and had not spoken to them since 2004, until his death.

Debunking the contents of his brother's SD, Richard told The Malaysian Insider that Charles was not included in Kevin's will which was made in 2005, adding that he would soon prove this.

"I will show the will very soon to the press to see for themselves," Richard added.

Richard, however, refused to respond when asked what he did with Kevin's body which he had claimed from the mortuary on Monday.