Hartalega Holdings Bhd
(April 1, RM8.36)
Downgrade to hold with a target price (TP) of RM8.45: Progress at Hartalega’s next generation complex (NGC) has been brisk, with six out of the 24 production lines (from Plants 1 and 2) having already started commercial production as at end-March 2015. As such, management is confident that the first two NGC plants are on track to be fully operational by January or February 2016.

Hartalega’s recent share price performance was impressive. The stock has rallied by 26% since we upgraded the stock to “buy” on Dec 2, 2014. The stock is now trading at 23 times forecast financial year 2016 (FY16F) price-earnings ratio (PER), which is slightly more than one standard deviation above its five-year mean PER. At the current share price, we believe the market has priced in NGC’s earnings prospects.

We are downgrading our rating on the stock to “hold”. Our target price is based on 22 times FY16F PER. We think its share price would likely consolidate at this level until further milestones are achieved, that is demonstration of its ability to sell additional outputs without drastic cut in average selling price and announcements on Plants 3 and 4. — AllianceDBS Research, April 1 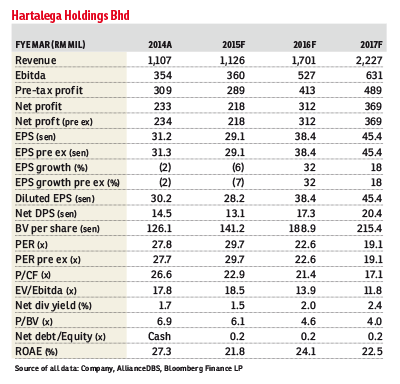