Harder for banks to grow revenue this year 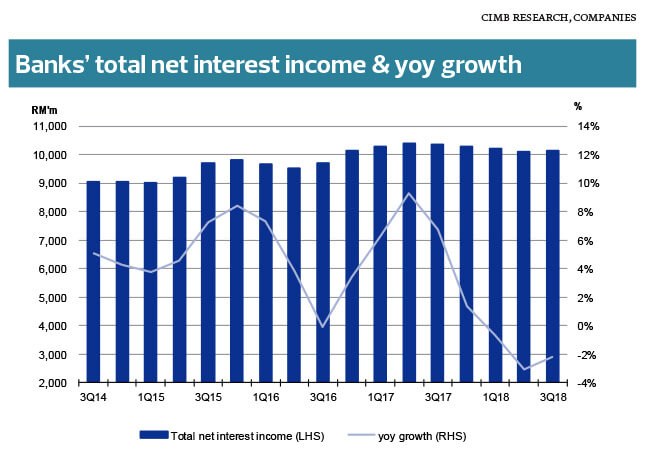 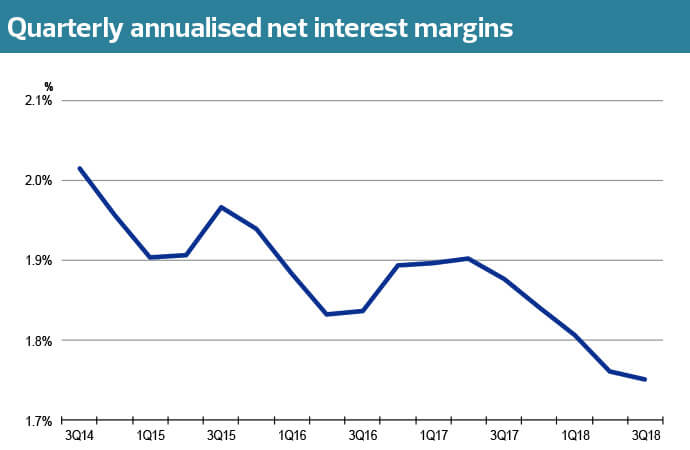 IT will be even tougher for banks to grow revenue this year given expectations of slower loan growth, ongoing pressure on margins and volatile capital markets, say bankers and analysts.

A trend of declining revenues has been evident since the second quarter of last year.

“Market challenges will remain; however,  the framework of base rates based on banks’ cost of funds will help mitigate the impact of margin compression,” says RHB Bank Bhd group managing director Datuk Khairussaleh Ramli.

This, however, does not mean that banks can simply raise their base rates, he adds.

“The base rate is formula-driven and it can be adjusted within a certain range, depending on their [banks’] respective cost of funds. It is reflective of increased funding cost,” he tells The Edge.

In recent months, Hong Leong Bank Bhd, CIMB Bank Bhd, Bank Islam Malaysia Bhd and Bank Muamalat Malaysia Bhd have raised their respective base rates by 10 to 13 basis points. In Malaysia, the base rate is the main reference rate for pricing retail loans like mortgages.

Maybank Investment Bank Research, in a Feb 4 report on the banking sector, says it would not be surprised if more banks opted to raise their base rates as funding costs rise.

One of the reasons funding costs have gone up is because of the stiff competition for deposits in recent months. Banks have been offering highly competitive rates to shore up retail deposits as a means to fund their lending, but this also takes a toll on their margins.

Hence, despite there being a decent expansion in loans last year — loans grew 5.6%, their fastest pace in three years — net interest margin (NIM) trended downward. This year, loan growth is expected to slow to about 5%, analysts say.

Khairussaleh says banks will increasingly look towards fee income to make up for slower revenue from loans. Wealth management is one area that is growing in importance.

“Increasingly, banks need to focus on growing fee income. Banks need to harness diversified revenue streams that go beyond just loans. My view is that there will be growing penetration into the wealth management segment as this holds high growth pontential in Malaysia. For us at RHB, we are driving wealth management among small and medium enterprises,” he says.

“It was a tough year for capital markets last year. For this year, based on recent reports, at least two major IPOs are expected to take place. Hopefully, there will be more such opportunities over the coming months,” he says. The two big IPOs he was referring to are that of QSR Brands (M) Holdings Bhd and Leong Hup International Bhd.

Analysts say that slower revenues pose one of the biggest headaches for banks now.

The revenue of public-listed banks fell 0.8% year-on-year (y-o-y) in 3Q2018, the second consecutive quarter of decline. The lower revenue was the main drag on banks’ core net profit growth, which stood at a mere 2% y-o-y compared with 6.3% in 2Q2018.

It was mainly lower costs and loan loss provisions that helped prop up net profit.

Banks have yet to release their 4Q2018 financial results, but the general expectation is that revenues would have declined for the third consecutive quarter. The reporting season for the sector will kick off with Public Bank Bhd’s results this week.

“Two consecutive quarters of declines in revenue underscore the difficulties banks face in expanding their top-line. What is even more discouraging is the fact that we do not expect the situation to improve significantly this year,” says CIMB Research in a Dec 12 report.

It expects competition for deposits will remain stiff this year, as banks will have to attract deposits to meet possible new requirements imposed by Bank Negara Malaysia for net stable funding ratio (NSFR), earliest by 2020.

“This will continue to exert downward pressure on banks’ margin and limit the recovery in the growth of net interest income this year,” it notes.

Last year, one the main reasons some banks shored up their deposits was to raise their NSFR — a key liquidity measure that prioritises long-term stable funding — ahead of this year’s expected adoption deadline. However, last November, BNM announced that it was extending the NSFR observation period for another year to 2020.

CIMB Research notes that catalysts for growth in banks’ fee income — another avenue of revenue — are also lacking this year.

“In light of [potentially] weaker economic growth this year, we think that expansion in banks’ fee income, primarily income from trade finance, treasuries and insurance could remain subdued,” it says.

In 3Q2018, banks’ net interest income — revenue from their customers’ loan payments minus what is paid out to depositors — slid 2.2% y-o-y, weighed down by margin contraction arising from the stiff competition in deposits. Non-interest income fell 7.7% due to weak investment and fee income.

Given the weaker revenues and the fact that there is limited room for banks to further reduce costs and loan loss provisions this year — they have been doing so for the past two to three years — analysts expect banks to see slower earnings growth this year.

“In view of the concerns for top-line growth and the expected upturn in credit cost cycle, we retain our ‘neutral’ call on banks”, says CIMB Research. Most analysts have a similar investment stance on the sector.