IT was the starting verse of a quiet piano ballad, as American singer Christina Perri performed one of her emotive songs to her Malaysian audience. The setup was an intimate, acoustic showcase — the perfect ambience for an immersive moment.

A bright light on the left pierced through the darkness, rousing a distracted glance in that direction. The culprit next to me was furiously typing on his WhatsApp chat. As the chorus came around, a couple behind increased the volume of their ongoing conversation to compete against the rise in emotions — and high notes — of the song.

Soon, a few more people inched gradually in front of me in the standing room venue. But it hardly made a difference, as I had been “watching” the gig through a woman’s constantly recording phone screen. She stopped intermittently to take yet another close-up shot to send to her friends via SMS with a “thumbs up” emoji.

The scenario was all too common, and the concert experience left much to be desired, owing in large part to my fellow audience members’ appalling concert etiquette.

On that note, here are seven rather annoying and rude habits that afflict Malaysian audience at the movies, concerts and other live events.

Excessive use of mobile phones

It’s an ongoing debate when it comes to the use of camera phones or other gadgets at a live event. Entertainers have come to rely on social media to promote them and their works for free. The flip side of that is a long list of grouses. The top of that list is that the audience disengage from the live experience; their excessive usage draws them away from what the artists have created for them.

It also involuntarily causes others to disengage. To consistently watch concerts through someone’s shaky phone screen — when they’re not taking selfies — is ridiculous, especially if you’ve paid a lot of money to be there.

And if the venue is completely darkened — such as in a cinema, at least adjust the brightness of your phone screen if you absolutely have to use your phone — but just don’t answer that call!

Talking loudly at a rock concert or a thumping set of a festival may be warranted, but it is only common sense to keep quiet in an acoustic set, recital or in the cinema. Otherwise, it would be disrespectful to the performers, rude to your seated or standing neighbours and embarrassing for yourself. Plus, no one wants a running commentary of the movie you’re watching.

There is a time and place for everything — this saying includes expressing appreciation and approval at a performance. Fans love to shout at the top of their lungs any moment they have a window to, some in hopes their beloved artists would somehow single them out. There is a fine line, however, between enthusiastic ovation and heckling when it comes to clapping and shouting. Vocalising appreciation is good; screaming in your own excitement may not be. Sometimes, the best form of appreciation is silence, because it really is not about you.

While you’re at it, heed those around you if you feel compelled to shout and sing along with every line of the songs as the artists are performing. They are not there to hear you sing karaoke in abandonment.

Just as we hate those who cut queues, it’s the same if we’ve spent hours — under the sun or in the rain — holding our spots at an event, only for people to shove, sneak or subtly inch their way in front of us. Even if there is space, politely ask if the person standing there would like to move forward or share.

There’s been arguments for banning popcorn in cinema. It is not entirely uncalled for, as little are found to be more annoying than the constant rustling of popcorn and noisy unwrapping of snacks, more so if in a quieter film.

Even the most comfortable event venue seats can be ruined by the dilemma of “who gets the armrest”. Reasonableness and due consideration are the order of the day here. Spreading your elbows and plonking them on both sides is definitely unacceptable and worse if you jab into the space of your seat neighbours. 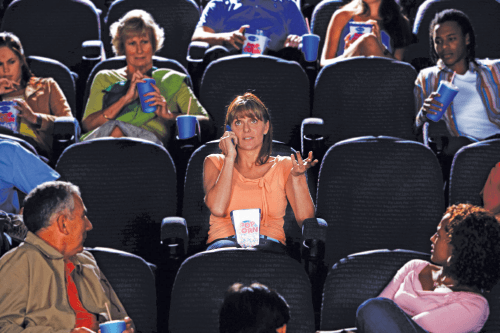 This article first appeared in The Edge Financial Daily, on March 10, 2015.