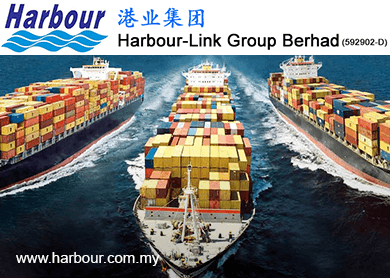 KUALA LUMPUR (June 18): Shares in Harbour-Link Group Bhd surged as much as 6.54% in the morning trades as analysts opined that the company is undervalued considering its strong earnings potential.

Some 724,400 shares changed hands. With the current price, it has a market capitalisation of RM495.04 million.

Harbour-Link (fundamental: 1.7, valuation: 1.8), a shipping and marine services, logistic services provider, was picked by The Edge Research's momentum algorithm for the 11th time since March 3, rising 52.9% over the period.

According to The Edge Research, the stock currently trades at a trailing 12-month P/E of 9.43 times and 1.74 times book.

Meanwhile, Kenanga Investment Bank Bhd (Kenanga IB) said in a note to client today that Harbour-Link is capitalising on the rising economy activities in Sarawak on the back of the Sarawak Corridor of Renewable Energy (SCORE) initiative.

"As a result, its net profit recorded 3-year compounded annual growth rate (CAGR) of 36.3% to RM33.4 million in financial year 2014 (FY14) while another record breaking year is on track with net profit of RM36.5 million chalked up for the nine-month period for FY15," it added.

"Meanwhile, earnings from the property development division are expected to be recognised in FY16 upon the completion of construction, which we estimate to be RM11.1 million in net profit," he added.

Furthermore, he said the group is now in net cash position and believed it will lead to higher dividend payout of 20% in FY15 and FY16, which translate into dividend per share (DPS) of 6 and 7 sen, respectively.

Thus, Kenanga IB has a "Trading Buy" call on the counter with a fair value (FV) of RM3.15.