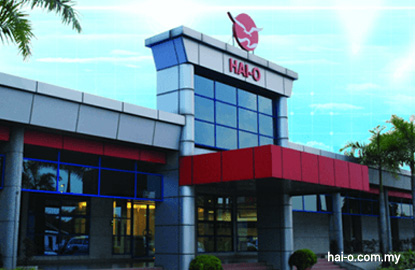 The company attributed the improved earnings to higher revenue achieved by the MLM division.

AffinHwang Capital maintained its "sell" call for the counter with a higher target price of RM2.40.

"We introduce our 2019 estimate numbers and increase earnings by 17% to 18% for FY17–18E after updating our assumptions for the MLM division. We increase our target price to RM2.40, based on price-earnings ratio (PER) of 11.6 times (five-year historical PER) and calendar year 2016 estimate (CY16E).

"However, we still maintain our 'sell' call as stock price has reached a high of RM2.73 (peak of RM3.17 in 2010). Note that Hai-O has been actively buying back its shares and currently holds 4.5% of its total issued and paid-up share capital, which brings up the possibility of a share dividend distribution to shareholders," AffinHwang said in a note today.

The research firm added that key risks to its call include a stronger upturn in consumer spending; a strengthening of the ringgit against US dollar, which will reduce import costs; and higher growth of members for the MLM business.