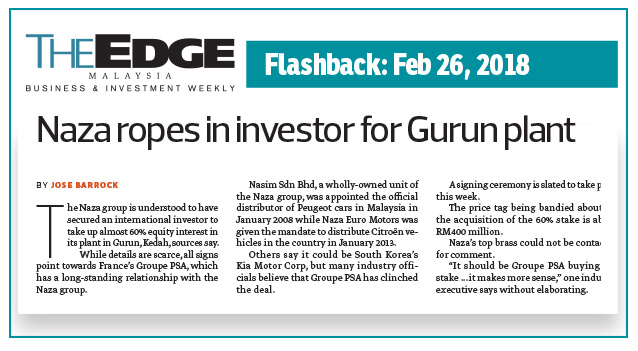 KUALA LUMPUR: Groupe PSA, which lost its bid for an equity stake in Proton Holdings Bhd, signed a share sale agreement and joint-venture agreement with Naza Corp Holdings yesterday — a strategic move for the French automaker to make Malaysia its Asean hub.

With the agreement in effect, Groupe PSA and Naza will jointly produce Groupe PSA branded cars for Malaysia and other Asean markets, said the joint statement issued by the two companies yesterday. The statement said further opportunities will also be explored beyond Asean, with a potential to contribute significantly to Malaysia’s economy.

The automaker, which has five marques under its belt, is buying a 56% stake in Naza Automotive Manufacturing Sdn Bhd (NAM), which owns the manufacturing plant, a Naza spokesman confirmed with The Edge Financial Daily. However, the price tag has not been revealed. The five marques held by Groupe PSA are Peugeot, Citroen, DS Automobiles, Opel and Vauxhall.

The news confirmed The Edge Malaysia weekly’s report over the weekend that Naza roped in Groupe PSA to take up a substantial stake in its plant. The weekly reported that the price tag being bandied about for the acquisition is about RM400 million.

“The Naza Group will have sole responsibility for the distribution of Peugeot, Citroën and DS Automobiles in the domestic market and, with Groupe PSA, will explore distribution prospects in other Asean markets to address the potential 680 million customers in the region, where the automotive equipment rate is growing,” the statement said.

The NAM plant is the first manufacturing hub in Asean for Groupe PSA. It has been operational since 2014, and has a workforce of close to 450 people and has a 50,000-vehicle production capacity. Reuters reported that the first vehicles are set to be produced in 2018 for Peugeot and in 2019 for the Citroen model.

Carlos Tavares, chairman of the managing board of Groupe PSA, said in the statement that the creation of Asean hub in Gurun, “is a significant leap forward for Groupe PSA which will lead to the development of a profitable business in the region as part of our Push to Pass strategic plan.”