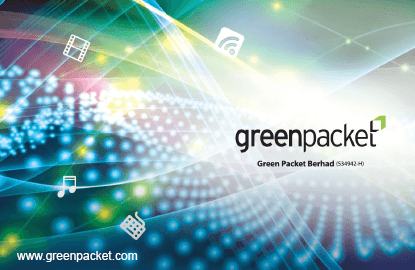 KUALA LUMPUR (April 13): Green Packet Bhd topped the most actively traded stocks in the morning session today after its 31.1%-owned associate, Packet One Networks (M) Sdn Bhd (P1), announced that it is rebranding itself as "Webe" moving forward.

As at market break, Green Packet saw 69.18 million stocks traded. Its share price rose two sen or 7.84% to 27.5 sen, the highest year to date, giving it a market capitalisation of RM192.01 million.

P1's major shareholder is Telekom Malaysia Bhd (TM), with a 55.3% stake, while the remaining is owned by South Korea-based SK Telecom.

"P1 is Webe. We are currently in the final stage on user testing (for mobile network services), and we will be launching it very soon," Puan said at the launch of Webe Community, a mobile app to promote community projects.

He, however, declined to reveal when P1 would launch the mobile service.