Greek deal was the easy part 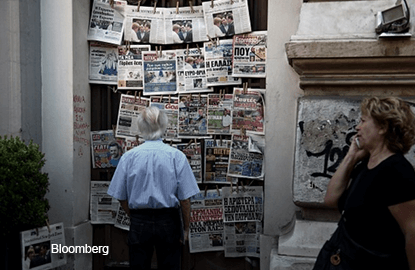 THE deal announced on Monday morning has averted, at least for now, Greece’s immediate exit from the eurozone — an outcome that no European leader was yet willing to press to its increasingly logical conclusion.

Greece undertook important policy commitments in return for about US$100 billion (RM381 billion) in incremental external financing. But the agreement doesn’t provide yet the type of debt relief the country desperately needs.

The negotiations over the weekend were bruising and messy, and came very close to an ugly derailment several times. Implementation will be equally difficult and uncertain — and not only because of the economic and financial challenges. The institutional, political and social aspects are equally thorny.

Reflecting the sad recent history of Greece’s relationship with Europe, which has eroded trust and mutual respect, the deal imposes intrusive monitoring and micromanagement by European institutions and the International Monetary Fund (IMF). And the conditions aren’t limited to a long list of steps that must be taken before any money is released and what are likely to be frequent on-the-ground policy reviews.

The Greek government also has to set up a special fund to receive state assets and the proceeds of privatisation to spend on activities that creditors deem important — including paying down debt and recapitalising banks — and that require their close involvement.

The immediate financial challenges of implementation include reopening banks that have suffered consequential damage to both sides of their balance sheets. On the liabilities side, huge deposit outflows have required enormous dependence on the European Central Bank’s (ECB) Emergency Liquidity Assistance, which will surely continue to be needed on a large scale in the short run. The asset side is dominated by a growing stock of non-performing assets and other dubious holdings (including a huge stock of Greek government bonds), raising serious doubts about the solvency of the banks.

In addition to the immediate recapitalisation of its banking system, the government must also secure bridge financing to clear its arrears to the IMF and meet a large upcoming payment to the ECB. And this needs to be done in a manner that acknowledges that Greece’s existing debt stock is already unsustainable.

These tricky steps toward financial normalisation are a necessary condition for reversing the economic implosion, but they are far from sufficient. Economic activity also faces headwinds because of the considerable structural damage that has already been inflicted, as well as the additional strain that new taxes will impose.

Meanwhile, credible pro-growth structural reform measures haven’t been properly developed; and too little of the external funding is likely to find its way into the economy for uses such as easing the strain on overstretched social safety nets.
The burden on Greece’s fragile institutional, political and social fabric will be intensified.

The task of implementing the reform commitments falls to Greek institutions that, until now, have lacked both the needed capabilities and credibility. They will now be operating under even greater scrutiny from European institutions and the IMF, which are unlikely to show much patience for slippage.

And patience will be needed, given the inevitable difficulties ahead, as well as the inherently unpredictable economic and financial responses to the measures.

This is the reality that an exhausted Prime Minister Alexis Tsipras faces as he returns to Greece from the negotiations in Brussels with a deal that undermines much of what he argued for in his election campaign. And it will be viewed by many as anathema to what Syriza, his party, stands for. It is also a worse agreement than the one Greek voters rejected in a referendum just two weeks ago.

The resulting domestic political drama, which could lead to early elections, will be amplified by the country’s deteriorating social conditions. Having suffered an enormous decline in output and living standards, Greek society now faces further hardship.

The latest deal may well have avoided a worse fate for Greek society in the very short term. But that doesn’t translate into immediate relief for a long-suffering population, let alone meaningfully better prospects for the medium term. Unemployment and poverty will continue to spread, and the genuine sense that Greeks have lost control of their destiny will intensify.

The last thing European leaders will want to acknowledge after this weekend’s marathon discussions is that the hardest part still lies ahead. Yet that is the complex reality of this very messy situation. — Bloomberg View