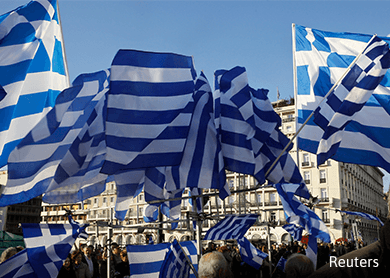 ATHENS (June 29): Greece moved to check the growing strains on its crippled financial system on Sunday, closing its banks and imposing capital controls that brought the prospect of being forced out of the euro into plain sight.

After bailout talks between the leftwing government and foreign lenders broke down at the weekend, the European Central Bank froze vital funding support to Greece's banks, leaving Athens with little choice but to shut down the system to keep the banks from collapsing.

Banks will be closed and the stock market shut all week, and there will be a daily 60 euro limit on cash withdrawals from cash machines, which will reopen on Tuesday. Capital controls are likely to last for many months at least.

"The more calmly we deal with difficulties, the sooner we can overcome them and the milder their consequences will be," a sombre-looking Prime Minister Alexis Tsipras said in a televised address. He promised bank deposits would be safe and salaries paid.

Even as Tsipras spoke late on Sunday, lines forming at petrol stations and in front of the dwindling number of bank machines that still contained cash highlighted the scale of the disaster facing Greeks, who have endured more than six years of economic decline.

The failure to reach a deal with creditors leaves Greece set to default on 1.6 billion euros of loans from the International Monetary Fund that fall due on Tuesday. Athens must also repay billions of euros to the European Central Bank in the coming months.

The impending default on the IMF loans leaves Greece sliding towards a euro exit with unforeseeable consequences for Europe's grand project to bind its nations into an unbreakable union by means of a common currency. It also carries broad implications for the global financial system.

After months of wrangling, Greece's exasperated European partners have put the blame for the crisis squarely on Tsipras' shoulders. The 40-year-old premier caught them by surprise in the early hours of Saturday by rejecting the demands of lenders and calling a referendum on the bailout.

The creditors wanted Greece to cut pensions and raise taxes in ways that Tsipras has long argued would deepen one of the worst economic crises of modern times in a country where a quarter of the workforce is already unemployed.

After announcing the referendum, Tsipras asked for an extension of Greece's existing bailout until after the July 5th vote. Euro zone officials refused, and in his televised address Tsipras bemoaned the refusal as an "unprecedented act".

Despite the hardening of positions, officials around Europe and the United States made a frantic round of calls and organised meetings to try to salvage the situation.

U.S. President Barack Obama called German Chancellor Angela Merkel, and senior U.S. officials including Treasury Secretary Jack Lew, who spoke to Tsipras, urged Europe and the IMF to come up with a plan to hold the single currency together and keep Greece in the euro zone. The German and French governments announced emergency political meetings.

French Prime Minister Manuel Valls urged the Greeks to come back to the negotiating table.

"I cannot resign myself to Greece leaving the euro zone ... We must find a solution," Valls told Europe 1, Le Monde and iTELE in a joint interview.

The euro fell sharply against the dollar and safe-haven U.S. government debt futures rallied as investors exhibited fears of a Greek default and exit from the euro zone.

"That is going to have a real big impact on markets and that will generate increased volatility," said Ian Stannard, European head of FX strategy at Morgan Stanley in London.

The bank holiday announced by Tsipras will last at least until Monday, July 6, the day after the planned referendum, an official said after a late-night meeting of the cabinet. The Athens stock exchange will be closed as the government tries to manage the financial fallout.

It remains unclear how long capital controls will remain in force. In Cyprus, which imposed similar measures in 2013, they were not fully lifted until April this year.

Tsipras faces growing political pressure with some opinion polls suggesting a majority of Greeks could turn their back on his call to reject the bailout and instead decide to support the lenders' package in next Sunday's referendum.

If they do, he would face pressure to resign, leaving the way open for new elections.

Former conservative Prime Minister Antonis Samaras, who on Sunday met Greek head of state President Prokopis Pavlopoulos, said Tsipras should drop the referendum plans and return to the negotiations or make way for a government of national unity.

As speculation of capital controls have increased over the past two weeks, Greeks have pulled billions of euros out of their accounts. Long queues formed in supermarkets on Saturday as shoppers stocked up on essentials.

Greece's top refiner, Hellenic Petroleum, said it had enough fuel reserves on hand to last for many months, but there were reports of long queues forming at petrol stations as motorists rushed to fill up.

The broader consequences for Greece's economy, now back in recession, are likely to be severe, with the tourism sector, which accounts for almost a fifth of economic output, about to start its vital summer season. Anxious to reassure tourists, the government said the 60 euro cash withdrawal limit would not apply to people using foreign credit or debit cards.

Travel companies had been warning tourists for some weeks that they should be prepared to take extra cash, given the likelihood of problems with the system. But the sight of cash machines that had run dry was a visible shock to many tourists.

"I am trying to go over to the bigger banks," said Cassandra Preston, a Canadian tourist who was searching around in central Athens for a machine that had cash. "I am here for another month and I would like to make sure I have some cash on me."

Many leading economists have voiced sympathy with the Greek government's argument that further cuts in spending risk choking off the growth that would give Greece some prospect of servicing debts worth nearly twice its annual national income.

However, in economic powerhouse Germany, other southern states that have endured austerity in return for EU cash and poor eastern countries with living standards much lower than Greece's, many voters and politicians have run out of patience.

"The ECB has always said that as long as Greek banks are solvent, then emergency loans, the ELA, can be granted," he said on Saturday. "And now there is naturally a new situation that because of the developments the liquidity and solvency of Greek banks, or some Greek banks, could be in doubt."