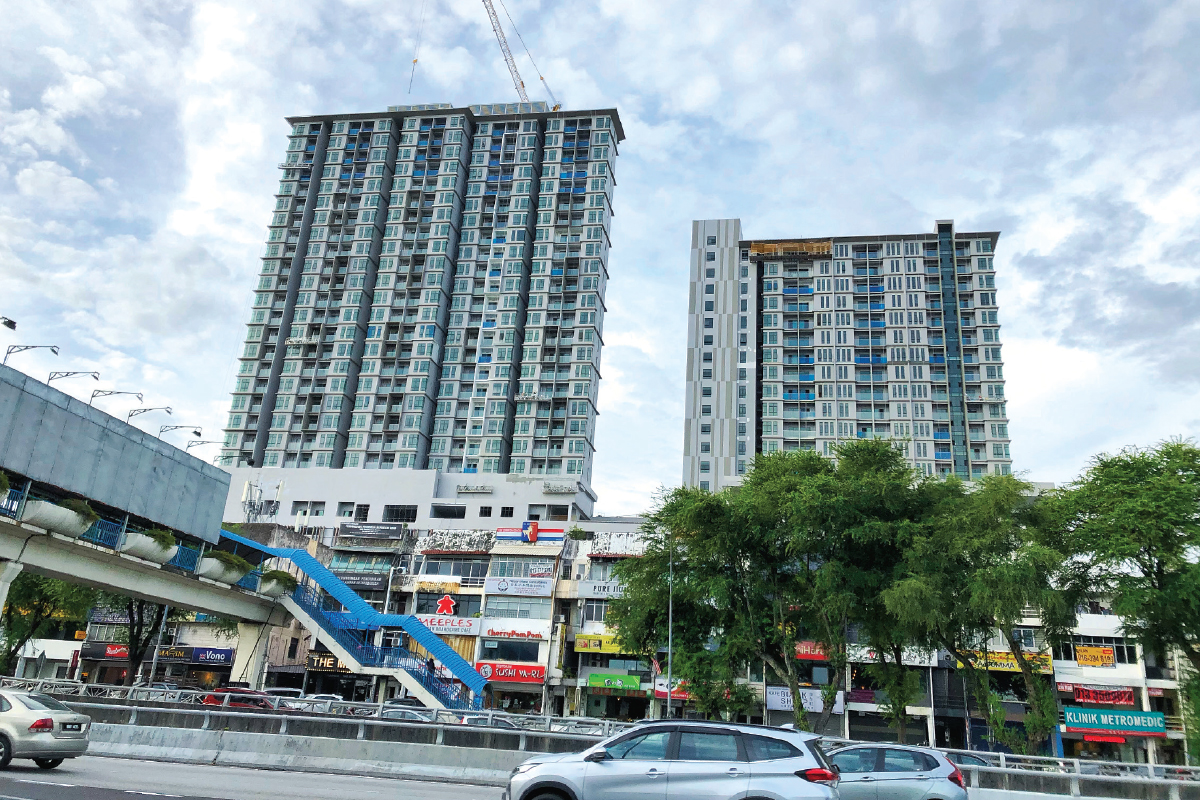 Designed to accommodate young adults and students of the university in the SS15 commercial area in Subang Jaya, Grand Subang Jaya sits atop a 2.05-acre plot on which Asia Café was located.

“Grand Subang Jaya is almost fully taken up, with only 29 units still available. Interestingly, we find that quite a few people in our target market [of young investors] are former students of the nearby university there, and are mostly below 40 years old,” says the company’s chief operating officer Mark Choo in a Zoom interview.

The freehold SoHo development has a gross development value (GDV) of RM277 million. “In terms of site progress, we are about 90% completed and on track to hand over the units by the middle of this year,” notes Choo.

“In the light of the Covid-19 pandemic, we will be focusing on the Grand Subang Jaya for most of 2021, and we will launch our upcoming projects when the market recovers.”

Grand Subang Jaya will have a total of 483 SoHos. All the units will have a standard built-up of 563 sq ft and will be segregated in two towers: one with 21 storeys and the other, 14 storeys. The units are priced between RM478,000 (RM850 psf) and RM525,000 (RM935 psf). “Our units are competitively priced. Owing to the nature of the product [and the strategic location], this is a good, viable investment,” he says.

Founded in 2005, Mediaraya’s notable projects include small office/flexible office (SoFo) developments Grand SOFO at Kelana Damansara Suite and Grand Subang in SS13. Mediaraya also operated the Asia Café chain with outlets in the Klang Valley, such as Kota Damansara and Puchong but has since stopped its food and beverage business. Choo: Quite a few people in our target market [of young investors] are former students of the nearby university there, and are mostly below 40 years old (Photo by Mohd Shahrin Yahya/The Edge)

“Our latest land acquirement is a 1.5-acre parcel next to the Federal Highway in Kelana Jaya. We bought the land for about RM16 million in December 2019. It adjoins the Nanyang Siang Pau building and is located opposite Kelab Golf Negara Subang (KGNS). We intend to build a commercial development there for long-term investment purposes. We are in the midst of planning and getting approvals for it,” says Choo.

Besides its latest purchase, the company owns a few pieces of land in Penang (one to two acres), Kuala Selangor (14.5 acres) and Kuantan (500 acres). “We also plan to develop on our land in Kuala Selangor soon. There will be about 200 homes there,” he says.

To keep up with the latest property trends, Mediaraya has introduced Commune Co-living for all its investment-type products such as Grand Subang Jaya. “We have formed a management team called Commune Co-living to ensure occupancy in our developments and provide value-added, after-sales service,” says Choo. “Our aim is to remove the hassle of property investments for our purchasers.

“The rental market in the [Grand Subang Jaya] the area is quite competitive. So, to stand out, we would like to offer an interactive, co-living lifestyle for tenants.

“For purchasers, Commune Co-living will offer design and renovation services and also matters regarding the lease such as handling the tenant’s day-to-day needs, rental collection and even utilities and maintenance payments.

“Our goal is to bring the residents [mostly students] together via the co-living concept. Our layouts, amenities and events are planned in a way that encourages and promotes interaction.

“Our future events will be compliant with standard operating procedures (SOPs) for dealing with the pandemic. We have placed temperature scanners and carry out sanitisation regularly at our existing projects, among other SOPs.” Grand Subang Jaya will offer a wide range of facilities for students to study, exercise and socialise, including a swimming pool, basketball court, basketball half court, multipurpose hall, mini-futsal court and gym.

Meanwhile, the development will also have its own F&B joint to replace Asia Café, which has been demolished. Formerly a vibrant hangout spot, Asia Café attracted large crowds daily, with more than 100 food stalls occupying a 60,000 sq ft space.

“This new food court will be significantly smaller at 24,000 sq ft. It will be a self-service joint with air conditioning,” says Choo.

Mediaraya has completed two projects so far. It launched Grand SOFO at Kelana Damansara Suite in Kelana Jaya in June 2013. With a GDV of RM190 million, the two-tower development boasts 430 SoFos with built-ups of 370 to 1,100 sq ft and prices that start from RM680 psf. The project was completed in June 2016 and is fully taken up.

Mediaraya also launched Grand Subang in 2016, located in SS13, Subang Jaya. With a GDV of RM286 million, the development was handed over last year and is 60% occupied. The freehold, 2.46-acre SoFo development offers 578 units in two 22-storey towers.  The units have built-ups of 520 to 883 sq ft, with prices starting at RM380,000. The development is almost fully taken up.