Grab to list in US in record US$40b SPAC deal 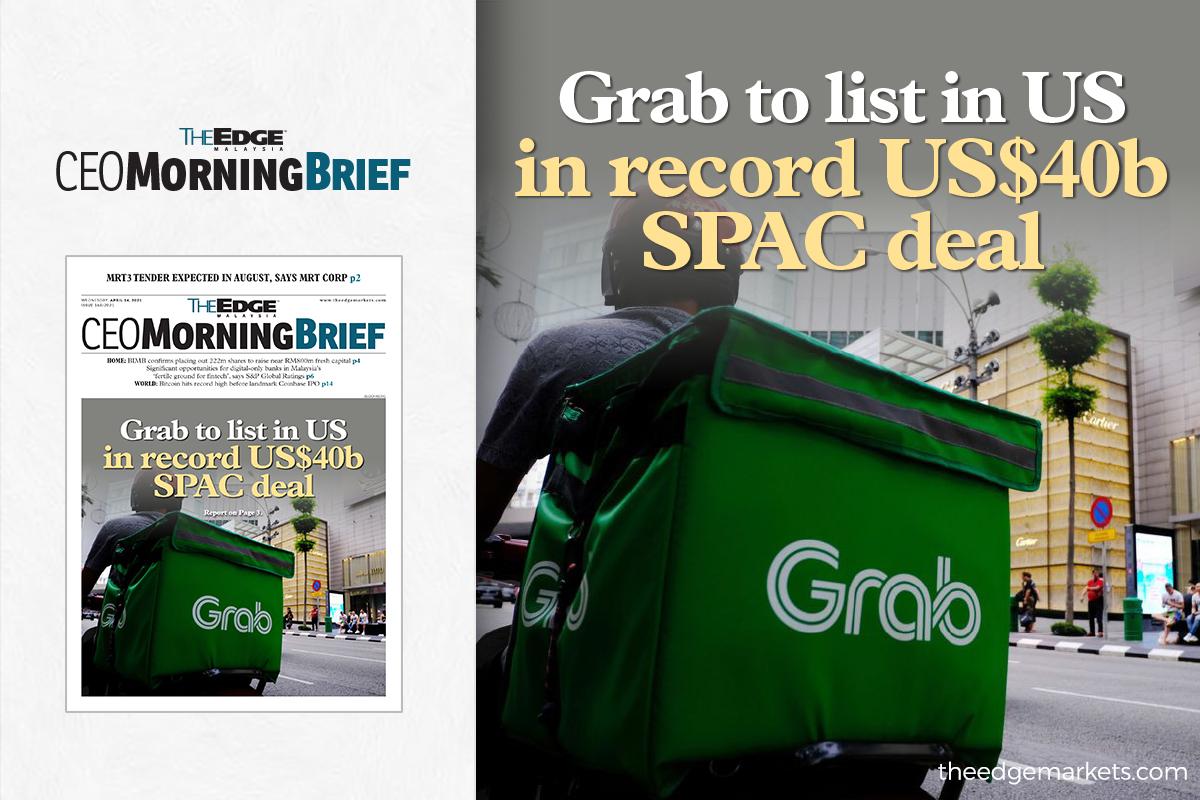 (April 13):Grab Holdings Inc, Southeast Asia’s most valuable startup, is going public in the US through a merger with blank-cheque company Altimeter Growth Corp in what is the largest-ever deal of its kind.

The Singapore-based startup is set to have a market value of about US$39.6 billion after the combination with the special purpose acquisition company of Brad Gerstner’s Altimeter Capital Management, the firms said in a statement Tuesday. Grab is raising more than US$4 billion from investors including BlackRock Inc, Fidelity International and T. Rowe Price Group Inc as part of the biggest US equity offering by a Southeast Asian company.

The deal would make the ride-hailing and food-delivery giant the first Southeast Asian tech unicorn to go public through a SPAC and give it funds to expand. Grab is trying to take advantage of a US-led SPAC listing boom, even though it’s showing signs of slowing amid increased scrutiny by regulators.

“This is definitely one of the best internet companies,” Gerstner said in an interview. “The runway ahead is very long and very wide for Grab if they continue to execute.” The combined entity’s stock will trade on the Nasdaq in the coming months under the ticker GRAB. Altimeter Capital, which orchestrated the initial public offering of Altimeter Growth in September, is putting US$750 million into the company, about a fifth of the fresh funds raised.

That, together with a three-year lockup period for its sponsor shares, indicates Altimeter’s long-term commitment to the company, Grab Chief Executive Officer Anthony Tan said. Altimeter, which manages US$15 billion of assets, has also committed as much as US$500 million to a contingent investment to be equal to the total amount of redemptions by Altimeter Growth’s shareholders.

“From sovereign wealth funds to mutual funds, it is world-class investors who are investing in us,” Tan said in an interview. “The world is seeing the potential of Southeast Asia and how exciting this region is.”

Grab, the market leader in Southeast Asia for so-called super apps for consumer services, expects its addressable market to expand to more than US$180 billion by 2025, from US$52 billion in 2020. Its total gross merchandise volume last year was US$12.5 billion, more than doubling from 2018 even as competition from arch rival Gojek intensified and the coronavirus pandemic restricted people’s movements.

The deal marks a remarkable turn for Grab. Under pressure from SoftBank Group Corp and other investors, the company had been negotiating a possible merger with Indonesia’s Gojek for most of 2020. But the talks ultimately collapsed around December and Gojek began talks with Tokopedia, another local internet giant.

Tan and Gerstner, both Harvard Business School graduates, began talking about a deal early this year after being introduced by common friends. Only about three months later, they reached an agreement for the record transaction.

Gerstner is no stranger to Southeast Asia, having invested in Singapore-based gaming and e-commerce leader Sea Ltd. The Tencent Holdings Ltd-backed company has emerged as a stock-market sensation since going public in New York in 2017. Among companies valued at US$100 billion or more, the stock is the No. 1 Asian performer since the start of last year and trails only Tesla Inc globally.

“The US and China have been big investment markets for 20 years and before Sea, Southeast Asia wasn’t really on many investors’ radar screens,” said Gerstner, who has been following Grab since its 2018 acquisition of the regional business of Uber Technologies Inc, another company he’s backed. “Now you have a second business with a US$40 billion market cap, which is going to be listed on the Nasdaq. This is a huge moment for global investors realizing the renaissance that’s occurring in Southeast Asia technology market.”

Tan founded Grab in his native Malaysia as a taxi-hailing app in 2012 with Hooi Ling Tan, a Harvard classmate. They kicked off operations in Kuala Lumpur as what was then known as MyTeksi, allowing users to book cabs.

Grab later relocated to Singapore before expanding as a ride-hailing app from Indonesia to Vietnam, the Philippines, Cambodia and Myanmar. With more than US$10 billion raised from investors led by SoftBank over eight funding rounds, Grab became Southeast Asia’s largest ride-hailing provider before expanding into food delivery, digital payments and financial services across eight countries in the region.

Working toward profitability, Grab said its mobility-services business is making money in all its markets, while food delivery is in the black in five of six markets. The company said it had about 72% of Southeast Asia’s ride-hailing market, 50% of online food delivery and 23% of digital wallet payments last year. Grab was previously valued at about US$16 billion, a person with knowledge of the matter said.

Among companies participating in the cash injection, a so-called private investment in public equity, or PIPE, are Singapore’s state-owned investor Temasek Holdings Pte, Janus Henderson Group Plc and Nuveen LLC. The expected market value also reflects the PIPE and SPAC proceeds of US$4.5 billion, as well as a US$2 billion term loan, according to Grab.