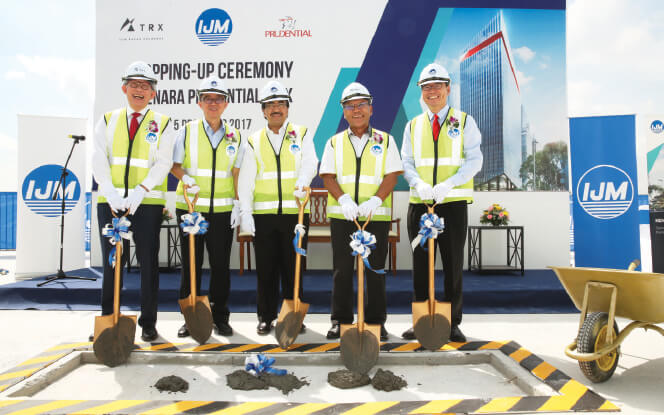 KUALA LUMPUR: The government has softened its stance on the controversial freeze on approval for luxury projects with units above RM1 million each, but it still needs to be convinced why the developments should move forward.

In an about-turn, Second Finance Minister Datuk Seri Johari Abdul Ghani said property developers can now go ahead with their plans to build offices and malls if they have good justification.

“If developers find places short of office spaces or malls, they can approach the relevant minister [with their plans],” Johari told reporters after the topping-up ceremony of the 27-storey Menara Prudential at the Tun Razak Exchange (TRX) here yesterday.

However, Johari cautions eager developers to take stock of the existing overhang of office spaces and malls.

“Anybody can build an office provided you know how to market it,” he said, pointing to IJM Corp Bhd’s success in securing Prudential Assurance Malaysia Bhd as the anchor tenant for the new office tower at TRX.

On Nov 17, Johari announced that the cabinet had frozen developments of all high-end projects to address the mismatch between supply and demand in the luxury property segment. This followed a Bank Negara Malaysia report revealing a huge amount of serviced apartments, small offices/home offices, retail and office spaces coming on stream in four years.

Johari also said TRX is exempted from the freeze as the entire master plan for the development had been approved. "Almost 80% of the TRX development has been taken up," he added.

“If offices are built in the right locations, the projects should be given the necessary approvals,” IJM Corp chief executive officer and managing director Datuk Soam Heng Choon said. He noted many companies are keen to move into energy-efficient offices such as Menara Prudential — a Grade A, Leadership in Energy and Environmental Design Gold-certified office building.

The RM500 million Menara Prudential, built and owned by IJM Corp, has secured tenants for 84% of its lettable 560,000 sq ft to date. It is one of IJM Corp's three projects at the TRX and is slated to be handed over to Prudential in the first quarter of 2019.

IJM also holds a design and build contract worth RM392 million for HSBC Malaysia's new headquarters at the TRX, and it had last week secured a RM30 million contract to construct the foundation and substructure of Affin Bank Bhd's new office tower there.

Although Affin Bank has yet to call for tenders for the construction of the new office tower, Soam said IJM Corp will submit its bid to be “part of the action” in building the 43-storey superstructure.

IJM Corp has an order book of RM2.9 billion year to date, Soam said, adding that it is just RM100 million short of its internal target of RM3 billion of job wins for the financial year ending March 31, 2018.

On participating in the tender to become the project delivery partner (PDP) for the Kuala Lumpur-Singapore high-speed rail project, Soam said the group expects the result of its pre-bid application to be announced by early 2018.

IJM Corp on Monday signed a pre-bid agreement with Sunway Construction Sdn Bhd, Jalinan Rejang Sdn Bhd and Maltimur Resources Sdn Bhd to form a consortium with equal shareholding of 25% each for the application.

Although Jalinan Rejang and Maltimur Resources do not have experience in rail infrastructure projects, Soam said they would contribute via their experience as the PDP for the Pan Borneo Highway.

Jalinan Rejang and Maltimur Resources are shareholders of Lebuhraya Borneo Utara Sdn Bhd (LBU), appointed the PDP for the 1,090km toll-free stretch of the Sarawak side of the highway.