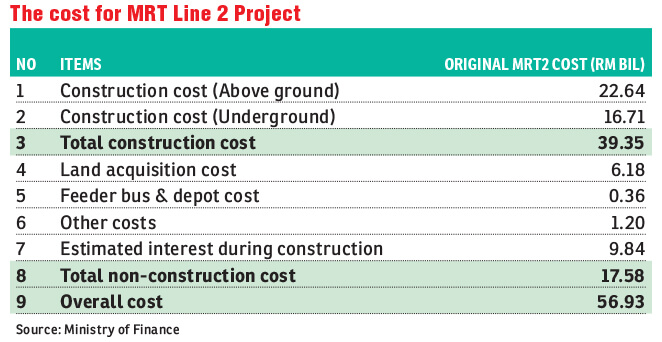 KUALA LUMPUR: The federal government will be retendering all the unfinished underground work of the Mass Rapid Transit Line 2 (MRT2) project, also known as the Sungai Buloh-Serdang-Putrajaya (SSP) line, through an international open tender process.

This follows the cabinet’s decision to terminate the underground work contract of the MRT2 with MMC Gamuda KVMRT Sdn Bhd, a joint-venture (JV) between Gamuda Bhd and MMC Corp Bhd.

“This decision was made after considering that the federal government can achieve further significant savings by retendering the underground work package compared with the offer made by the existing contractor,” said Finance Minister Lim Guan Eng in a statement yesterday.

The statement did not say whether the federal government would need to pay MMC and Gamuda compensation for the termination.

According to a source close to the matter, the MMC-Gamuda JV is entitled to compensation based on Clause 60 of underground works, including work completed by date of termination, costs for materials and pre-ordered items, expenses borne for purposes of work completion and “reasonable costs for maintenance works and roll-out of equipments arising from the termination”.

Meanwhile, Guan Eng said there is already a RM5.22 billion, or 23% savings, made from the above ground portion of the MRT2 project. “More savings will be gained when the underground portion is retendered soon,” he added.

Guan Eng said the money saved will reduce the debt and interest the federal government would need to repay, which ultimately would be borne by the rakyat through future taxes.

Having pioneered the project delivery partner (PDP) model for the country’s first MRT project in the Klang Valley, MMC Gamuda KVMRT was appointed by Mass Rapid Transit Corp Sdn Bhd (MRT Corp), a wholly-owned company of the Ministry of Finance (MoF) as the PDP for the implementation of MRT2 in March last year.

To recap, the MRT2 project was approved by the cabinet on Feb 26, 2014, with an initial estimated cost of RM28 billion. This figure did not include consultant fees, PDP fees, interest cost and the overhead cost for MRT Corp.

Guan Eng said the MRT2 cost then ballooned to RM56.93 billion due to factors such as the approval for a railway scheme that had a new line extended to Bandar Malaysia, a change in scope and depreciation of the ringgit.

“The overall cost comprised RM39.35 billion construction cost (of which RM22.64 billion was for the above ground portion and RM16.71 billion for the underground portion), RM6.18 billion land acquisition cost, RM360 million for feeder bus and depot cost, RM1.2 billion of other costs, as well as RM9.84 billion worth of interest expenses during construction,” he added.

Since May this year, however, the MoF, together with cooperation from the Attorney-General’s Chamber, the ministry of transport, agencies such as MRT Corp and the private sector, had embarked on a cost rationalisation exercise on MRT2. An engineering consultancy firm was engaged to conduct the cost rationalisation.

Consequently, the cabinet on Oct 3 this year accepted an offer made by MMC-Gamuda through their letters dated Aug 15 and Sept 7 to complete the above ground portion of the MRT2 project as a turnkey contractor at the cost of RM17.42 billion, 23% lower than the original cost of RM22.64 billion.

“This is a RM5.22 billion, or 23% savings, achieved through a reduction in cost and rationalisation in work scope without cancelling any of the above ground stations,” Guan Eng noted.

“More savings will be gained when the underground portion is retendered soon.

“Furthermore, the expected cost reduction for the MRT2 project will cut the fares future rail passengers will have to pay, and boost public transport usage in the Klang Valley,” he added.

The scaling down of the MRT2 project is expected to pose a downside to analysts’ forecasts on Gamuda and MMC.