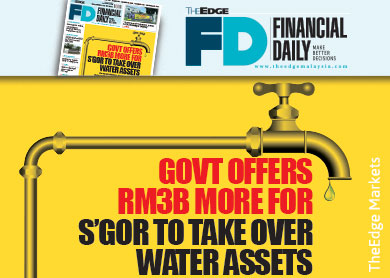 However, the minister revealed that the master agreement signed by the federal government with the previous Selangor state administration cannot be disclosed — as per the advice of the Attorney-General — because the agreement contains elements that have yet to be finalised.

“This includes price negotiations with the concessionaires by Selangor themselves,” he told reporters at the Parliament lobby yesterday.

Ongkili noted that some of these companies are listed on the stock exchange and have to be answerable to shareholders and so it would not be wise to create more speculation by disclosing the document.

He said one of the concessionaires had yet to call for an annual general meeting. On the additional money that the federal government is setting aside for the Selangor government to buy over the concessionaires, Ongkili said it is based on the premise that “Langat 2 [Water Treatment Plant] must go on”.

“The federal government told Selangor that if you want water this time we will help you (Selangor). You negotiate with the concessionaires under my supervision on a willing-buyer-willing-seller [basis],” he said.

The minister said the discussion with Syarikat Pengeluar Air Selangor (Splash) had not been finalised yet but had confidence in new Selangor Menteri Besar Mohamed Azmin Ali to settle the issue.

“We have yet to meet. Let him settle down and I [will] wait for his call if he wants to talk. It is up to Selangor to offer. I only provide the fund for them or whatever is required.”

Ongkili was responding to Mohamed Azmin’s comment in an English daily recently which said Attorney General Tan Sri Abdul Gani Patail must explain why Putrajaya refused to declassify the water restructuring agreement, which is protected by the Official Secrets Act 1972.

It was previously reported that the Selangor government had made a final offer of RM9.65 billion to take over the four concessionaires in the state and three of them, namely Puncak Niaga (M) Sdn Bhd, Konsortium Abbas Sdn Bhd and Syarikat Bekalan Air Selangor Sdn Bhd, had agreed to the deal for a collective RM7.8 billion.

Only Splash was against Selangor’s buyout offer.

“The RM9.65 billion is just for the loans and bonds that are owed by all these companies,” said Ongkili, noting that the sum is actually not sufficient for some of these concessionaires to service their loans.

As to whether RM9.65 billion is a ceiling, Ongkili said, it depends on whether all the concessionaires agree to let go of their concessions to the buyer, which is the Selangor government, or through state-owned Kumpulan Darul Ehsan Bhd or a separate entity that will be formed.

“At the moment we have only prepared RM3 billion, [but even] if it is not enough, Selangor may not want money from the federal government [because] they may have their own money to buy,” he said.

This article first appeared in The Edge Financial Daily, on November 6, 2014.