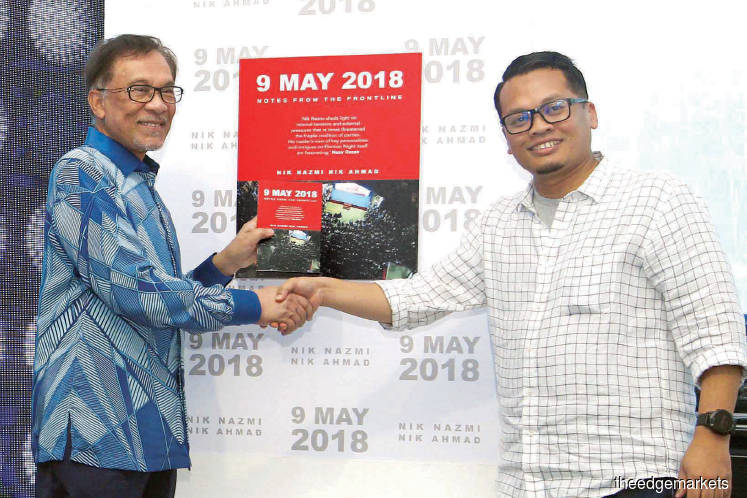 PETALING JAYA (Dec 2): While institutional reform is needed in the country, the "basic bread and butter economic issues" must be prioritised to prevent backlash from the people, says Nik Nazmi Nik Ahmad.

“It’s about solving the basic needs of the people. You can talk about institutional reform, but if the bread and butter issues such as wages are not solved, then we will get backlash and we are already seeing signs of that,” the Member of Parliament (MP) for Setiawangsa said at the launch of his book entitled "9 May 2018: Notes from the Frontline" by PKR president Datuk Seri Anwar Ibrahim today. The price of the book is at RM25.

Nik Nazmi said while the ruling Pakatan Harapan coalition managed to secure the majority of parliamentary seats during the recent 14th general election (GE14), it did not, however, get support from certain quarters of the country and must therefore work harder to earn their trust.

“Even though we have won, we did not get a majority of support from the east coast of Peninsular Malaysia, everyone knows that. We also did not get Malay support from Perlis, nor in most seats in Sabah and Sarawak. So these are the things that we need to realise and try to reach out to them,” he added.

For Nik Nazmi, GE14 was a personal milestone as he was contesting for the first time at federal level. He clinched the Parliamentary seat of Setiawangsa, the only seat in Kuala Lumpur that Barisan Nasional had never lost previously.

In his book, Nik Nazmi gave his behind-the-scenes take on the political developments in the opposition coalition from the disappointing loss of GE13 to the ecstacy win of GE14.

“I thought it was important that we document this experience and I wanted to contribute my account so that we can remind ourselves as we embark on a New Malaysia,” he said.

Recalling the fall of the Pakatan Rakyat coalition and the founding of Pakatan Harapan, he also gave his first-hand account of the back room politics, the party conferences, the development of the non-profit organisation INVOKE Malaysia, working with Prime Minister Tun Dr Mahathir Mohamad, as well as insight into the campaigns he worked on in Selangor and Setiawangsa, and in marginal seats from Perlis to Sabah.

Meawhile, Anwar conceded that a lot more has to be done to address the bread and butter issues, especially the poor and marginalised groups.

“Now that I am MP for Port Dickson, I see that poverty remains an issue till today. While I advocate for dismantling the New Economic Policy to create more progressive ones, many Malays in the rural areas remain suspicious of our efforts because we are not seen as creating tough measures to elevate poverty.

“But I am mindful that to succeed, we must be clear that we will work on getting rid of corruption and show more compassion towards the marginalised,” he said in his speech at the book launch.

Nik Nazmi previously served as private secretary to Anwar from 2006 to 2008. Nik Nazmi also held the position of the first Pakatan Harapan Youth Leader from 2017 to 2018 and PKR youth chief from 2014 to 2018. He was a two-term Selangor state assemblyman until 2018.

Later after the launch, Anwar urged Umno and PAS leaders not to proceed with the rally linked to the International Convention on the Elimination of All Forms of Racial Discrimination (ICERD) on Dec 8.

He said they should not deny that there was currently racial anxiety, in addition to Putrajaya having said that it had decided not to ratify the United Nations convention.

“I am asking for the wisdom of Umno and PAS leaders as we can’t deny there is racial anxiety now," he added.

Anwar also called on leaders to show more courage to tackle racism in the country.

"The agenda of reform does not finish necessarily with a change in leadership. On May 9, Malaysians showed that they were willing to stand together to fight corruption, racism and bigotry.

"We may have won (GE14), but we must continue the fight especially with the rising racism in the West and other nations," said Anwar.

"Yes, we have problems like with what happened (rioting) at the Sri Maha Mariamman Temple in USJ25 recently. But I believe Malaysians can be better.

We should never be proud of these religious bigots, they are there waiting for the chance to screw up the nation. I believe if we remain steadfast in our conviction to our promise for reform, we can achieve justice for all," he added.