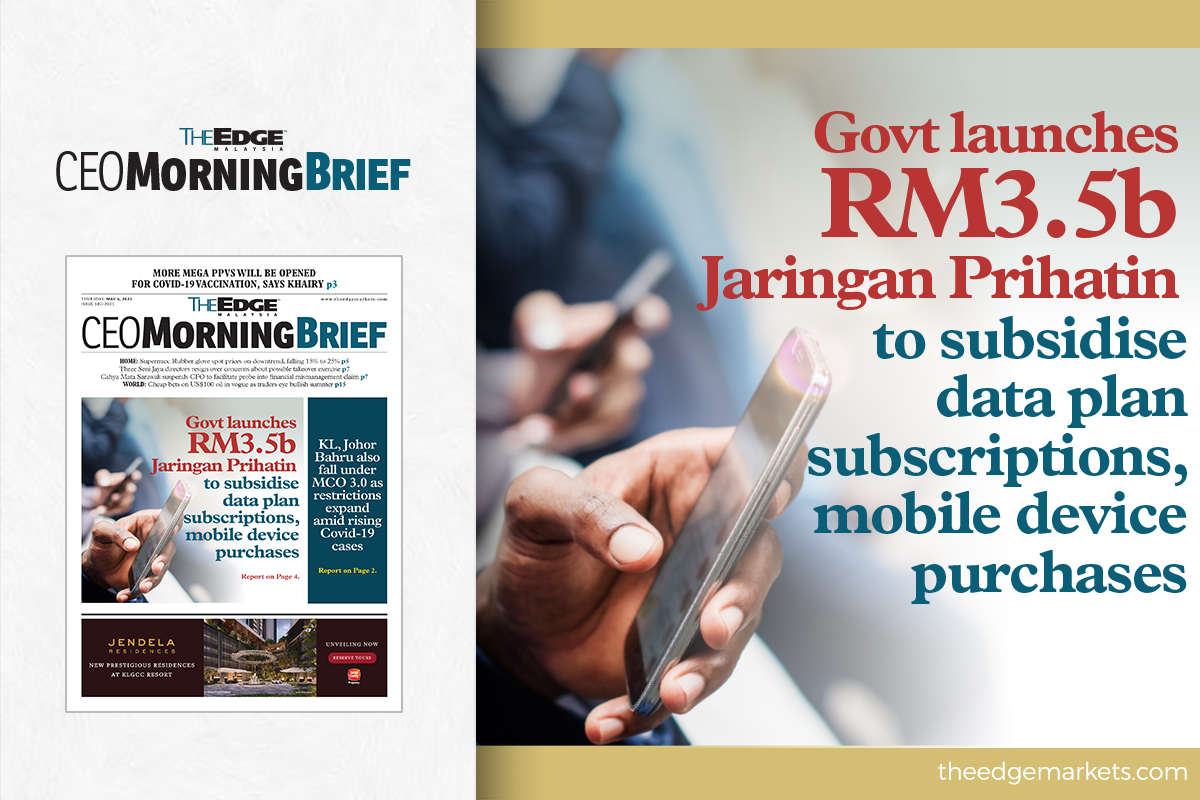 KUALA LUMPUR (May 5): As part of the government's efforts to bridge the digital divide by addressing the issue of affordability, Prime Minister Tan Sri Muhyiddin Yassin today launched the RM3.5 billion Jaringan Prihatin programme to assist in subscriptions of broadband internet plans and purchases of mobile smartphone devices.

The subsidy is expected to benefit around 8.4 million people from the B40 group who are the existing recipients of the Bantuan Prihatin Rakyat (BPR), according to the Ministry of Finance.

Of the RM3.5 billion, the government will spend a total of RM2 billion while 12 telcos and service providers namely Celcom, Digi, Maxis, Mcalls, redONE, speakOUT, Tune Talk, U Mobile, unifi Mobile, XOX Mobile, YES and Yoodo will work together to provide additional contributions amounting to RM1.5 billion, mainly in the form of free data.

"The reality is, there are still people who have been left behind by the current wave of digitalisation in our country. The increase in internet usage clearly shows that it is time for internet access to become a basic need such as water and electricity for every segment of the society.

"To bridge the digital divide within society, there is a need to ensure that everyone has the access [to internet] at an affordable cost as well as the skills needed to take advantage of the internet by 2030," Muhyiddin said today during the virtual launch of Jaringan Prihatin.

The Jaringan Prihatin programme was announced as part of the Budget 2021 last year with an original allocation of RM1.5 billion. The government subsequently added another RM500 million allocation to the programme under the PEMERKASA package announced last March, raising its value to RM2 billion. On top of that, the aforementioned 12 telcos are also offering additional benefits worth RM1.5 billion, bringing the total value to RM3.5 billion for BPR recipients.

In its framework to address the digital divide in the country, Muhyiddin said the government is focusing on three key strategies, which are accessibility, financial affordability, and skills.

Under accessibility, Muhyiddin said the government has allocated RM21 billion to upgrade broadband services nationwide through the Jalinan Digital Negara (JENDELA) plan which includes fibre optic plans, as well as increasing the coverage of good quality 4G by 2022.

"We will also accelerate the provision of 5G infrastructure with private investment through Digital Nasional Bhd's efforts estimated at RM15 billion. God willing, this effort will help reduce the coverage and speed gap within the next five years," he added.

On top of that, the government through the Malaysian Communications and Multimedia Commission has built 910 Community Internet Centres (PIKs) throughout the country. PIK is a digital community hall to guide the community to equip themselves with digital skills such as online business or e-commerce.

Finance Minister Tengku Datuk Seri Zafrul Abdul Aziz, who also gave a speech during the launch today, acknowledged that there are improvements that need to be implemented by the government to address the digital divide in the country.

"The government will continue to champion the inclusion agenda, and ensure that the country is on track for sustainable growth. To that end, the Ministry of Finance has begun drafting the 2022 Budget, and examining all matters that will be focused on holistically, to ensure sustainable and inclusive growth in line with the 12th Malaysia Plan and the Shared Prosperity Vision 2030. These include in terms of digital inclusion to bridge the digital divide of the vulnerable and B40," he said.

Under Jaringan Prihatin, eligible recipients can choose one of two benefits: a device package or a monthly data plan package, for which they are entitled for a rebate of up to RM300 for the device package and up to RM180 monthly of data plan rebate for 12 months.

Registration for Jaringan Prihatin opens today (May 5) until July 31, 2021. Eligible recipients can register with the telco of their choice and join any of the plans recognised under the programme.