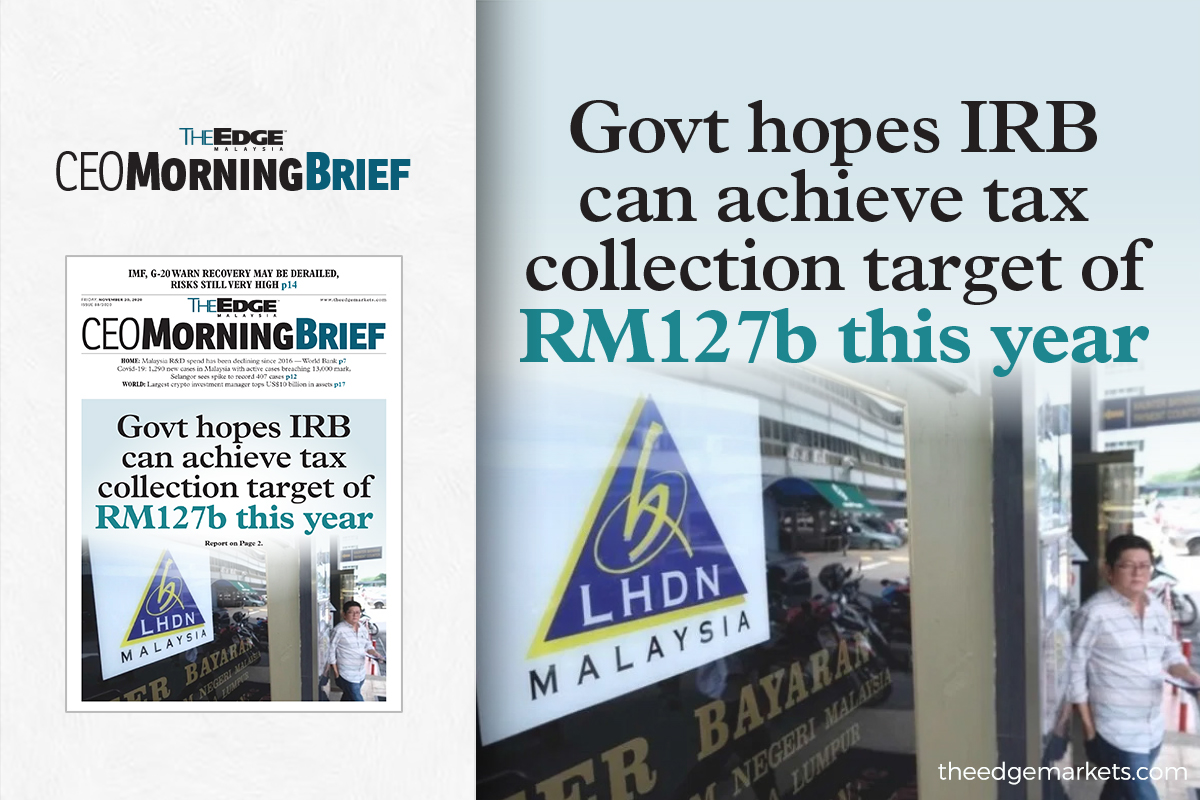 He said the role and function of the IRB is very important to ensure that tax collection is always at the optimum level even though collection activities during the Covid-19 pandemic is very challenging, in order to balance the hardship faced by affected traders and responsibility as a tax administrator.

He said the ability of IRB to operate efficiently and effectively in collecting revenue for the country would facilitate the government in realising its recovery and development agenda such as those outlined in Budget 2021 and the 12th Malaysia Plan.

"Efforts to realise the government's agenda for the people's well-being and the nation's prosperity will not be achieved if there is insufficient finances," he said in his speech at the virtual launch of IRB Innovation and Integrity Day 2020.

"Hence, I call on all IRB employees to continue to carry out their tasks to ensure the government has sufficient funds to finance the country's expenditure,” he said.

Tengku Zafrul said Budget 2021, tabled in the Dewan Rakyat on Nov 6, will act as a medium for the people's well-being and support the business sector through the introduction of taxation measures that would benefit the targeted groups.

The government's objective to reduce the financial burden of the people due to the impact from Covid-19 is translated through the reduction in income tax rate, increase tax relief limit as well as broaden the scope of income tax relief, and stamp duty exemption for specific transactions.

"The announcement of tax measures without introducing any new tax are among the government's continuous efforts to stabilise the country's economy which is impacted by the Covid-19 pandemic," he said.

Tengku Zafrul said the government is also looking at efforts to fine-tune the tax revenue by addressing the shadow economy, with an estimated size of about 21 per cent of the country's gross domestic product (GDP), as well as to curb smuggling of products with high tax rates.

"By streamlining efforts to address shadow economy activities such as smuggling, will certainly bring huge benefits to the nation's revenue and also people's well-being and ensure business continuity,” he said.

On the annual IRB Innovation and Integrity Day, Tengku Zafrul said its organisation has enabled IRB to be at a high level of preparedness in facing the evolution of the Fourth Industrial Revolution by incorporating digitalisation in all its work processes.

He said the revenue transformation plan developed by IRB had successfully increased the overall effectiveness of the taxation work processes, besides also enabling the board to quickly adapt to the new normal working environment when government agencies were asked to implement Work From Home directive.

Meanwhile, IRB chief executive officer Datuk Seri Dr Sabin Samitah said as a tax collection agency under the Finance Ministry, IRB would strive further to carry out its duties to generate the financial source needed by the government to revive the nation's economy, even though it is facing a critical situation currently.

"Various initiatives have been undertaken by the IRB to ensure the taxation services will be continued, besides reducing the burden experienced by the people affected by pandemic," he said in his speech from Menara Hasil in Cyberjaya near here.

In conjunction with the celebration this year, IRB launched three new taxation products such as IRB Corporate Planning Book 2021-2025, which is also the agency's five-year strategy and manifestation plan, and MyTax which is an information gateway and one-stop centre for taxpayers.

The other product is the APM Digital Learning Hub — an e-education platform with comprehensive content choices including video, books and other sources related to skills such as business and management, leadership development as well as digital transformation.