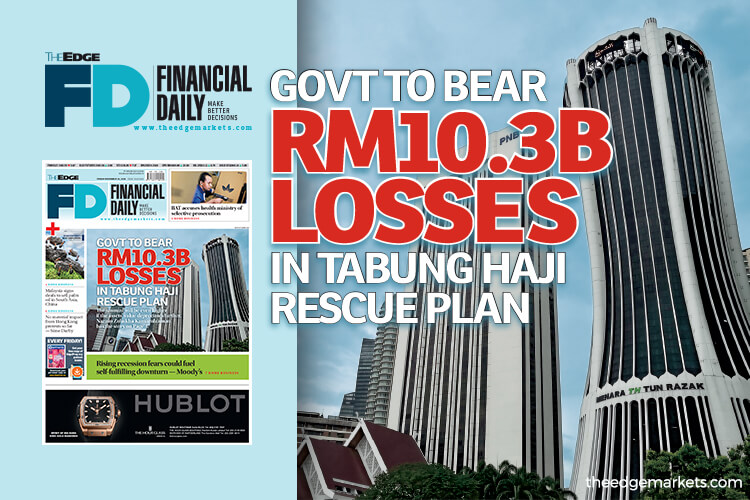 KUALA LUMPUR: Putrajaya is to bear the difference of RM10.3 billion between the price at which Lembaga Tabung Haji’s (Tabung Haji) non-performing assets were transferred to a state-owned company and the market value of the assets.

This was announced yesterday by the company, Urusharta Jamaah Sdn Bhd (UJSB), which is a special purpose vehicle formed by the finance ministry to assist in the rehabilitation of the assets taken over from Tabung Haji.

“In the event the value of the assets depreciates further, then the losses for the government will be higher than RM10.3 billion,” UJSB said in a statement.

The company said it had completed the transfer of the non-performing assets as part of Tabung Haji’s rescue and restructuring plan on Dec 28 last year.

“This was done as a result of previous financial mismanagement and wrongdoings,” it said.

UJSB said the transaction involved the transfer of assets with a market value of RM9.63 billion from Tabung Haji to UJSB in exchange for RM19.90 billion, consisting of two tranches of sukuk totalling RM19.60 billion and RM300 million in cash payable to the pilgrimage fund.

“The difference of RM10.3 billion between the consideration of RM19.90 billion and RM9.63 billion market value of assets is to be borne by the government to ensure that the financial health of Tabung Haji is restored,” it added.

The assets transferred consist of a mixture of listed equity holdings, properties and one unlisted plantation asset, said UJSB.

The property assets include a parcel of land measuring 1.568 acres (634ha) at Tun Razak Exchange (TRX) which was purchased by Tabung Haji at RM2,760 per sq ft (or a total of RM188.5 million) — significantly higher than the RM75 per sq ft (total of RM5.1 million) that was paid for by 1Malaysia Development Bhd.

The land was then purchased by UJSB from Tabung Haji at RM400 million (RM5,856 per sq ft), which does not reflect its actual market value, said UJSB.

“In a recent valuation exercise conducted in March 2019, the market value of the said TRX land stood at only RM205 million.

“The huge difference between the market value and the purchase value of the land (95% premium to market value), together with all the other assets acquired by UJSB, was needed to ensure the successful rescue and restructuring plan of LTH (Tabung Haji),” UJSB said.

The company noted that it will bear significant losses as a result of impairment charges estimated at more than RM10 billion for the assets acquired from Tabung Haji.

The TRX land transaction itself will result in an impairment charge of RM195 million, it said.

“With the transfer of assets now completed, UJSB will continue with its mandate and purpose, which are to carry out the rehabilitation and restructuring of assets under its care; to maximise asset recovery value; and to redeem all monetary instruments issued by UJSB and subscribed by LTH in a timely manner,” it added.