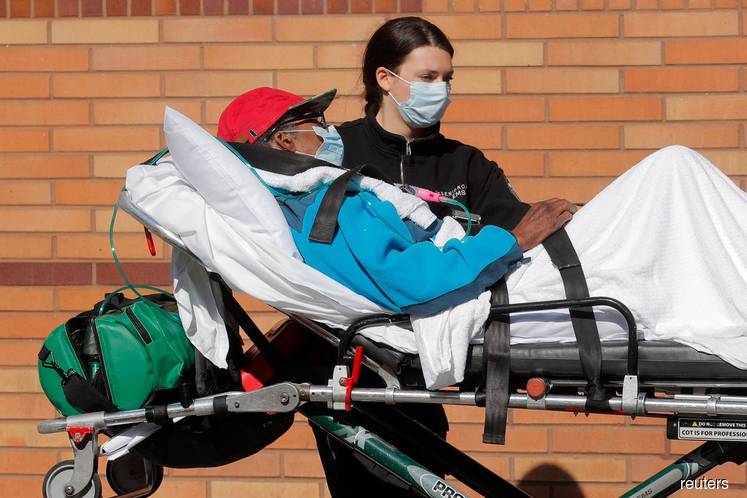 NEW YORK (April 6): New York Governor Andrew Cuomo on Monday cited tentative signs the coronavirus outbreak was "flattening" in his state but warned against complacency, as the U.S. death toll topped 10,000 and the number of cases reached 350,000.

New York reported 4,758 coronavirus-related deaths as of Monday, an increase of 599 from Sunday, compared with an increase of 594 during the previous 24 hours. On Friday, the state's death toll increased by 630.

Cases in the state increased by 7% in 24 hours to 130,680, Cuomo said. Hospitalizations, admissions to intensive care units and intubations — the process of inserting a breathing tube for use in mechanical ventilation — had all declined, signs of a "possible flattening of the curve".

"While none of this is good news, the possible flattening of the curve is better than the increases that we have seen," Cuomo told a daily briefing, referring to the shape of the curve when deaths were shown on a graph.

Cuomo extended until April 29 an order to keep non-essential businesses and schools closed and told residents venturing outdoors in good weather, while ignoring social distancing rules they faced maximum fines of US$1,000, twice the original penalty.

"This virus has kicked our rear end," Cuomo said. "Now is not the time to slack off from what we are doing."

U.S. stocks were sharply up on the New York data, with the S&P up nearly 6%, making it now down about 22% from its Feb 19 peak. At its recent March low, stocks were down more than 30%.

A national U.S. health official said the country entered what he called the "peak death week," while a watchdog report said hospitals were struggling to maintain and expand capacity to care for infected patients.

The U.S. death toll, numbering 10,297 on Monday, was rapidly closing in on Italy and Spain, the countries with the most fatalities to date at nearly 16,000 and more than 13,000 respectively, according to a Reuters tally of official data.

He raised particular alarm for the states of New York, New Jersey, Connecticut and the city of Detroit.

Even so, Giroir said on NBC's "Today" show, "whether you live in small-town America or you live in the 'Big Apple,' everyone is susceptible to this and everyone needs to follow the precautions we've laid out."

More than 90% of Americans are under stay-at-home orders issued by state governors while eight states still were holding out on imposing such restrictions.

The watchdog report, based on a national March 23-27 survey, showed that "severe shortages" of testing supplies and long waits for test results were limiting the ability of hospitals to keep track of the health of staff and patients.

"Hospitals also described substantial challenges maintaining and expanding capacity to care for patients," said the report issued by the U.S. Department of Health and Human Services Office of Inspector General said. It was described as a snapshot of the issues hospitals faced in mid-March.

The watchdog said "inconsistent guidance from federal, State, and local authorities" was confusing hospitals and the public, while widespread shortages of personal protective equipment put hospital staff and patients at risk.

New York City Mayor Bill de Blasio said that a shortage of medical professionals was replacing a lack of equipment as the city’s primary need and called for an additional 45,000 clinical personnel for April.

"More and more, the challenge is going to be personnel," de Blasio told reporters outside a surgical gown manufacturing facility. "We need these supplies, but we also need heroes to wear them."

The city has reported more than 3,100 deaths, and it may resort to temporarily burying the dead in an unspecified park, said Mark Levine, chair of the New York City Council health committee.

"Soon we'll start 'temporary interment'. This likely will be done by using a NYC park for burials (yes you read that right). Trenches will be dug for 10 caskets in a line," Levine wrote on Twitter. "It will be done in a dignified, orderly — and temporary — manner. But it will be tough for NYers to take."

At least one model offered hope that the death rate was slowing in the United States. The University of Washington model, one of several cited by U.S. and some state officials, now projects U.S. deaths at 81,766 by Aug 4, down about 12,000 from a projection over the weekend.

White House medical experts have forecast that between 100,000 to 240,000 Americans could die in the pandemic, even if sweeping orders to stay home are followed.