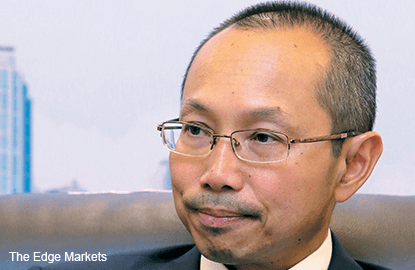 KUALA LUMPUR: The government is closely monitoring the country’s economic landscape, said Minister in the Prime Minister’s Department Datuk Seri Abdul Wahid Omar, with one of the facets in focus being improving employment opportunities and quality of graduates.

When queried by reporters on how the government will address Malaysia’s poor consumer sentiment, Abdul Wahid said there are a multitude of contributing factors.

On a brighter note, he said the latest unemployment rate of 3.2% still fell under the 4% rate, which is considered as “full employment” for the economy.

“But having said that, we have to monitor [the unemployment level] closely, and we want to make sure the needs of industries are met. This is where we focus on graduates’ employability,” he said after launching the third Malaysia Statistics Conference yesterday.

Abdul Wahid explained that the government’s Skim Latihan 1Malaysia was done to upskill current graduates, so that they meet the industry’s requirements. The training scheme has a target of increasing its participants to 15,000 next year from 10,000 participants this year.

The Malaysian Institute of Economic Research reported that the Consumer Sentiments Index fell to a new low of 70.2 points in the third quarter this year, continuing its decline since the corresponding period last year. The reasons it cited for the fall were deteriorating current incomes, a yawning job outlook and cautiousness over spending, although trepidation over higher prices moderated.

The unemployment rate, meanwhile, rose to the 3% level last December, and ticked up to 3.2% since July. The Economic Planning Unit has forecast the unemployment rate this year to average at 2.9%, even amid reports of retrenchment by companies such as CIMB Group Holdings Bhd, Malaysian Airline System Bhd and RHB Capital Bhd that amount to thousands.

The Department of Statistics will release September employment figures on Nov 25.

As for the soaring prices of goods due to the goods and services tax and imported inflation, Abdul Wahid said the country needs to focus on increasing Malaysians’ income level — although he didn’t provide any suggestion offhand.

“Our target is to make sure that the [wage] growth is at a faster rate than the increase of prices.”

Abdul Wahid also pointed out that the slower global economic growth will eventually impact Malaysia, as the country is driven by the service and manufacturing sectors.

“Last month, when we presented Budget 2016, it was on a basis of a slowdown or a moderating growth in global economies — including China. They would then contribute to global growth of only 3.1%. That was already a downward revision from 3.3% earlier by the IMF (International Monetary Fund),” he said.

Reiterating the official gross domestic product growth projection of between 4% and 5% for 2016, Abdul Wahid said he hopes the manufacturing sector, particularly the electrical and electronic sector, continues its buoyant performance from the third quarter to make up for the slowdown in the service sector.

“We also have a series of infrastructure projects that will help sustain growth in 2016. But having said that, it is important for us to continue to monitor the economy, particularly consumer sentiment. And I suppose we have to come up with measures to revive the sentiment,” he said.