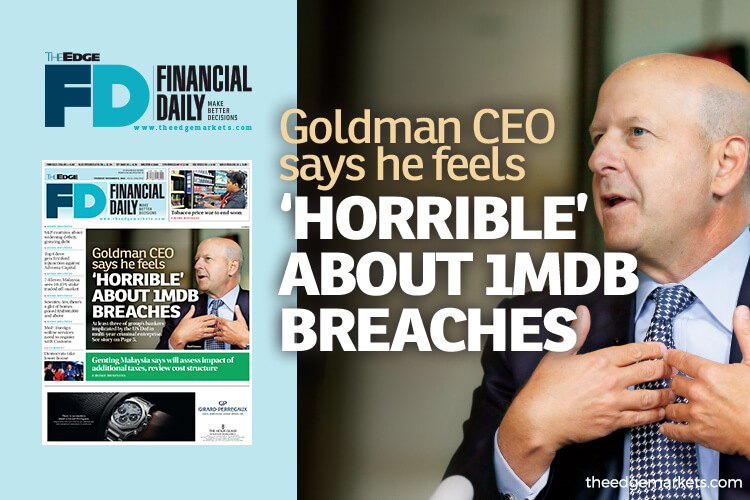 At least three Goldman bankers were implicated by the US Department of Justice (DoJ) in a multi-year criminal enterprise that included bribing officials in Malaysia and elsewhere and laundering hundreds of millions of dollars. In one of his first major headaches as CEO, Solomon will have to wrestle with the fallout from the firm’s growing entanglement in the high-profile corruption probe.

“It is obviously very distressing to see two former Goldman Sachs employees went so blatantly around our policies and so blatantly broke the law,” Solomon said in a Bloomberg Television interview yesterday at the New Economy Forum in Singapore. “We take the matter extremely seriously and we continue to work with the authorities as they investigate it.”

Goldman has been under scrutiny for years for its role in raising US$6.5 billion for 1MDB — and for the nearly US$600 million in fees it earned from the bonds. 1MDB is at the centre of a global scandal involving claims of embezzlement and money laundering, which have triggered investigations in the US, Singapore, Switzerland and beyond.

Court documents unsealed last Thursday said an unidentified Goldman official in Asia conspired with former Goldman bankers Tim Leissner, Roger Ng and Malaysian financier Low Taek Jho, and had knowledge that bribes were being paid. Prosecutors’ description of the official lines up with that of Andrea Vella, Goldman’s former co-head of investment banking who was placed on leave later that day.

Goldman has previously said it believed the money it was raising for 1MDB would be used for development projects. A bank spokesman said last week that it is cooperating with authorities, and declined to comment further.