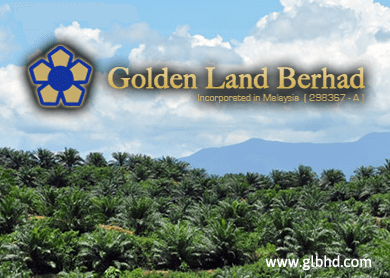 KUALA LUMPUR (July 22): Golden Land Bhd has proposed to undertake a cash distribution totalling RM190.33 million or 88 sen per share to reward its shareholders, through a share capital reduction and repayment and the proposed distribution of a special cash dividend of 13 sen per share.

This is subject to the completion of a RM655 million disposal of its subsidiaries and a parcel of oil palm plantation land in Beluran, Sabah, to Felda Global Ventures Holdings Bhd’s unit, Pontian United Plantations Bhd.

In a filing with Bursa Malaysia today, Golden Land (fundamental: 0.7; valuation: 2) said the entitlement date for the cash distribution will be determined and announced later.

The corporate exercise will result in the adjustment to the par value of Golden Land shares, but not to the existing number of shares.

Meanwhile, Golden Land is proposing to declare a special cash dividend of 13 sen for every Golden Land share, which amounts to RM28.12 million.

The special dividend will be paid out of the net proceeds to be received by the company from the proposed disposal.

"Barring any unforeseen circumstances, the proposed distribution is expected to be completed in the first quarter of 2016 after completion of the proposed disposal of assets," Golden Land said.