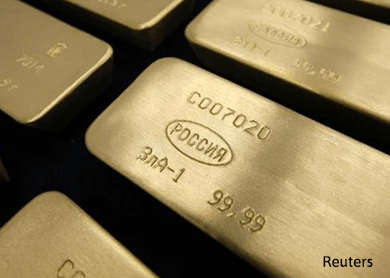 MANILA (Sept 1): Gold rose on Tuesday as equities faltered on fresh signs of weakness in China's economy although mounting expectations that the U.S. Federal Reserve will likely go ahead with an interest rate increase this month kept gains in check.

Activity in China's factory sector shrank at its fastest rate in at least three years in August as domestic and export orders tumbled, increasing investors' fears that the world's second-largest economy may be lurching toward a hard landing.

That sent Asian stocks reeling on Tuesday, stretching overnight losses that followed weekend comments from a key Federal Reserve official suggesting a rate increase in September is likely. The dollar similarly weakened as risk aversion favored the euro and yen.

"We are seeing some general risk-off moves in the Asian timezone and some buying of gold would be consistent with that," said Ric Spooner, chief market analyst at CMC Markets in Sydney.

Bullion ended August 3.5% higher as worries over China's slowing economy sparked safe-haven bids, although the metal has since come off a seven-week top.

Growing indications that the Fed could lift rates at its next policy meeting on Sept 16-17 could limit gold's upside potential.

Spooner said only another "fear-based" deep rout in global equities like that seen on Aug 24, following a slump in Chinese stocks would "dissuade the Fed from easing."

"And I think if we did see a very strong number in the nonfarm payrolls this week, it would certainly give them an opportunity ... to make their move in September," he said.

But Spooner said there is a chance that the U.S. rate hike - which would be the first since 2006 - could induce profit-taking in the dollar and potentially buoy gold.