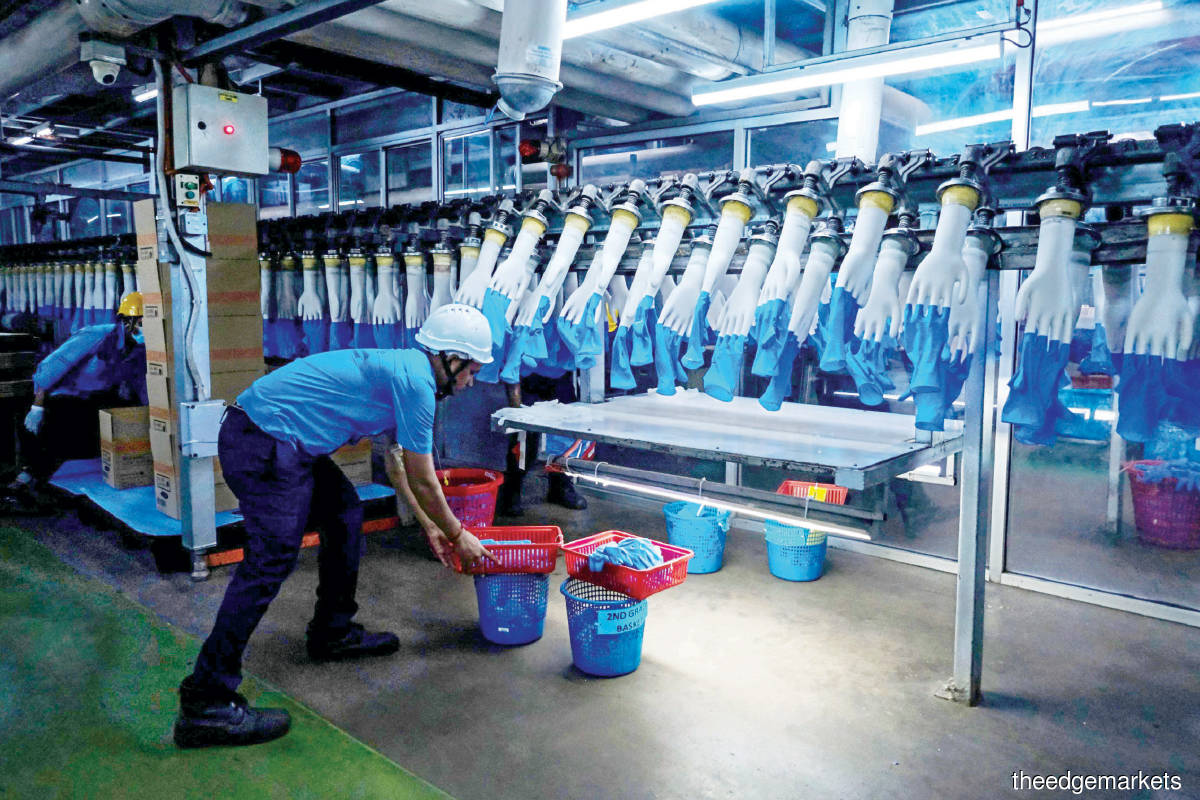 Among the four biggest rubber glove makers on Bursa Malaysia, the market seems to view Kossan and Supermax more negatively than Top Glove and Hartalega. (Photo by Bloomberg)

THE outlook for the rubber glove industry globally is still dire, given the overcapacity and weak demand, with most of the world moving into endemicity late last year.

This can be seen from the low trailing 12-month (TTM) price-to-earnings ratio (PER) of both Supermax and Kossan of less than three times, while Top Glove and Hartalega command higher PERs of 7.19 times and 5.21 times respectively.

“For Supermax, [it is] highly likely due to the overhang with regards to the Withhold Release Orders (WROs) by the US Customs and Border Protection (US CBP). I don’t think it has been settled yet,” says an analyst with a local research firm.

To be clear, Supermax is not the only rubber glove manufacturer suffering from overcapacity and low average selling prices (ASP).

Hartalega CEO Kuan Mun Leong told the media last week that ASP has bottomed, with Chinese producers selling below US$20 (RM89.65) per 1,000 pieces of nitrile gloves while Malaysian manufacturers are still selling above US$20.

In fact, Hartalega was the first among the four to report a net loss in its quarterly earnings over the last one year. In the fourth quarter ended March 31, 2022, Hartalega recorded a net loss of RM197.9 million, compared with a net profit of RM1.12 billion in the previous corresponding period due to the imposition of Cukai Makmur.

Top Glove, being the largest glove maker in the world, and Hartalega, being an efficient nitrile glove producer, have always traded at a premium to the other players.

At a TTM PER of 2.68 times and a forward PER of 14.41 times, Supermax is the cheapest of the lot.  Its 10-year forward PER averaged at 9.71 times. The reason the market is less appreciative of the counter could very well be due to the WRO issue with the US CBP.

In an Aug 4 report, PublicInvest Research noted that Kossan’s cash pile stood at RM2.2 billion as at 1HFY2022, giving the group ample room to declare higher dividends if the management so wished.

“Although management intends to maintain its regular dividend payout ratio at 30%, we believe there is still room for a special dividend.

“Given the delay in capacity expansion, while its automation and transformation plans are not likely to cost more than RM100 million a year, Kossan has sufficient reserves to reward its shareholders,” says the research firm in the report.

However, Raymond Choo Ping Khoon, an analyst with Kenanga Research, explains that his target price of RM1.03 for Kossan, a downgrade from RM1.20 before its 1HFY2022 results were announced, was based on 14 times FY2023E earnings per share (EPS).

The 14 times was at 33% discount to its peers’ average to reflect its smaller market capitalisation after imputing a 5% discount for a 2-star ESG rating as appraised by the research house.

Choo has an “underperform” call on Kossan, as the outlook for the rubber gloves sector is still expected to be gloomy for the rest of 2022. He estimates that global glove manufacturing capacity has risen by 22% to 511 billion pieces per annum in 2022.

“On the other hand, as more countries come out of the pandemic, we project the global demand for gloves to ease by 10% in 2022 to 387 billion pieces (partly also due to the destocking activities along the distribution network).

“This will result in an excess supply of 124 billion pieces (assuming, hypothetically, capacity utilisation is maximised),” states Choo in the July 27 report.

He adds that global glove manufacturing capacity will surge by another 16% to 595 billion pieces in 2023, as more capacity planned during the pandemic years finally comes online, while the global demand for gloves resumes its organic growth of 15% annually.

This will result in the excess supply rising further to 150 billion pieces, states Choo in the report. He adds that based on Kenanga’s estimates, the demand-supply situation will only start to head towards equilibrium in 2025, when there is virtually no more new capacity coming on stream.

Similar to Kossan, Supermax is cash rich, sitting on net cash of RM2.8 billion as at end-June.

In a statement announcing the WRO, the US CBP said that it had identified 10 of the International Labour Organization’s indicators of forced labour during its investigation on Supermax and its subsidiaries.

Then in November 2021, the Canadian government halted its import of rubber gloves from Supermax until an audit report mandated by the firm on the allegations of the group engaging in forced labour was reviewed by authorities.

Supermax Canada at that time retained two contracts with the Canadian government after it had submitted information on due diligence processes and mitigation measures put in place to meet its universal labour and human rights responsibilities.

However, based on the seriousness of the allegations and while waiting for the final audit report on Supermax’s labour practices to be ready between April and June this year, the Canadian government decided to also terminate the two remaining contracts with Supermax in January.

It is not clear whether Supermax has managed to get back into the North American market vis-à-vis the allegations and actions taken by the US and Canadian authorities. According to news reports, Canada makes up 9% of Supermax’s total sales globally.

However, Supermax is building a major manufacturing facility in Texas, its first in the US, and its 18th plant worldwide. The plant’s first phase, built at a cost of US$350 million, will have a capacity to produce up to 400 million pieces of gloves per month.

The first phase of the Texas plant was initially expected to be completed in the fourth quarter of this year. However, this has been pushed back to the second quarter of 2023.

According to Supermax, the first phase of the Texas facility is anticipated to meet at least 10% to 15% of the US’ annual medical nitrile glove demand over the next two to four years, while the second phase will address 20% to 25% of demand in the US over the next four to six years.

While it is not clear how much the US market contributes to Supermax’s bottom line, the country absorbs 36% of Malaysia’s total exports of rubber gloves. According to Supermax’s latest annual report, trade receivables due from the US made up 34% of total receivables.

Supermax is also being scrutinised in the UK. In May, the UK High Court allowed a case against the UK government to proceed for its continued use of gloves manufactured by Supermax, due to forced labour allegations against the Malaysian company.

Kenanga’s Choo downgraded his target price on Supermax to 62 sen per share on Aug 23, after the group reported its final quarterly results for FY2022. The target price is based on 13 times FY2023F EPS after imputing a 5% discount to reflect its 2-star ESG rating as appraised by Kenanga.

BIMB Securities’ Nursuhaiza Hashim also lowered her target price for Supermax to 64 sen per share on Aug 23, based on 13.7 times PER that is pegged to CY2023F EPS of 4.7 sen, which is a 30% discount to the average sector five-year historical forward PER of 19.6 times.

“We believe our valuation is justified given our expectations that ASP could decline further due to supply-demand imbalance, stiff competition from China makers as well as the challenging operating environment,” says Nursuhaiza in the report.