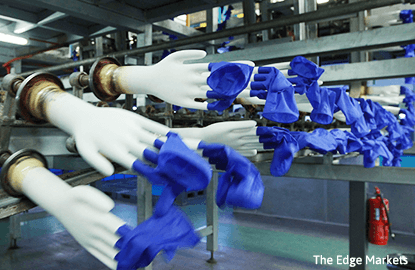 KUALA LUMPUR (June 6): The four biggest glove makers in Malaysia saw their share prices come under pressure today as the ringgit strengthens against the US dollar by 0.92% to 4.107 at the time of writing.

An analyst who declined to be named told theedgemarkets.com that one possible reason behind the selling in glove counters is the strengthening of the ringgit, which would make glove exports more expensive.

Currency exchange aside, the Malaysia 2016 April external trade report, which was released last Friday (June 3), also showed that the export of rubber manufactures fell by 46.08% year-on-year to RM351 million, from RM651 million.

Supermax Corp Bhd's share price, which was unchanged in the morning session, was also not spared on the resumption of trading after the noon break: it slid by one sen or 0.42% to RM2.40 as at 3pm.