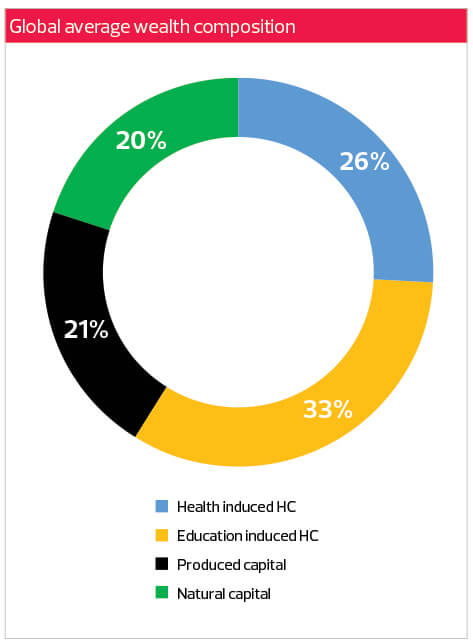 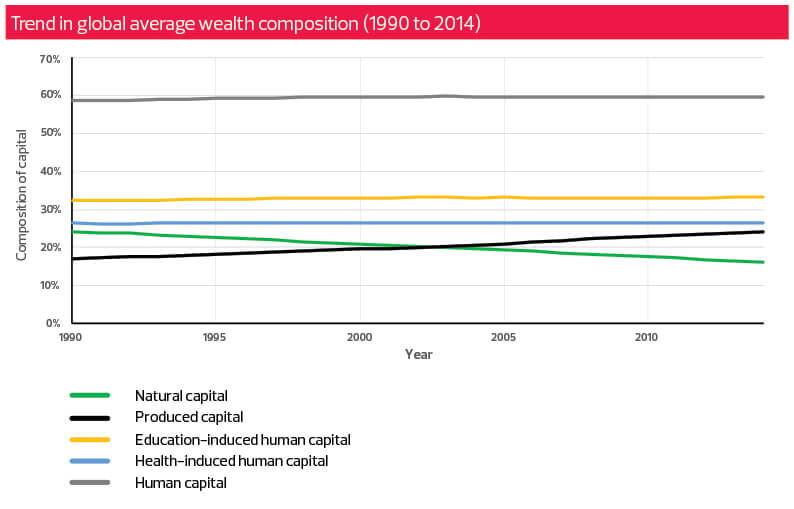 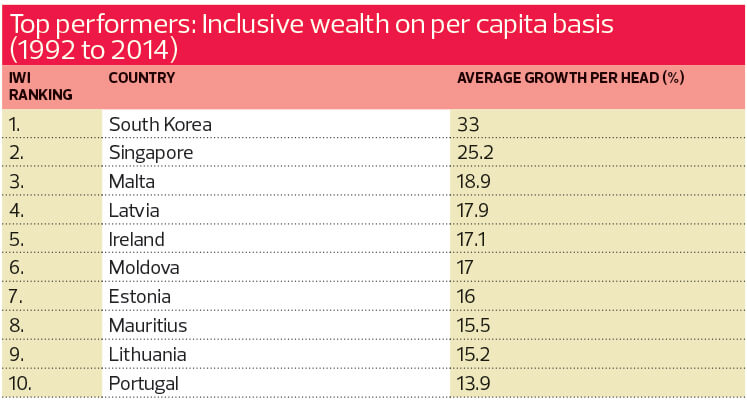 The use of gross domestic product as a measure of a country’s economic performance is insufficient, say the authors of a recent report by the United Nations Environment Programme and its partners. Inclusive wealth would be a better indicator, they argue, as it takes into account natural, human and manufactured capital.

The preliminary report, titled Inclusive Wealth Report 2018, highlights how GDP growth can occur parallel to environmental degradation and the overexploitation of resources, which render the development unsustainable in the long run.

“GDP is a measure of income and not wealth. GDP puts a value on a nation’s goods and services rather than on its stock of natural, physical and human assets … There is another problem with equating economic progress with GDP: It fails to account for what a nation loses as its economy grows. Economic growth and more efficient production often go hand in hand with a rise in, for example, air and water pollution,” says the report.

Inclusive wealth measures human well-being by totalling the value of the three forms of capital, which “lead to the ultimate purpose of an economy — social well-being”. Manufactured or produced capital refers to assets such as roads and machines, human capital includes knowledge and health while natural capital involves forests and fossil fuels, among others.

The rate of biological extinctions today is 100 to 1,000 times the average background rate of the past million years and climate change as well as depleting fisheries are just some problems that are already plaguing many societies, says the report. The shrinking Aral Sea, located in Central Asia, is a prime example of how growth can be hampered by environmental damage.

“Water diversions for cotton and rice production caused the surface area of the Aral Sea to fall so dramatically that ships could no longer reach the shores of existing cities, transforming a once economically vibrant body of water into one with virtually no economic value. If we are to fully appreciate this cost, then we need a better measure of economic progress and social well-being, one that assesses a nation’s ability to look after its wealth in a way that safeguards it for future generations,” says the report.

In response, the authors of the report came up with an Inclusive Wealth Index (IWI), which looks at 140 countries — representing US$56.84 trillion of the global economy and 6.89 billion people — and assesses the changing health of these assets (natural, human, manufactured) from 1990 to 2014.

They found that 44 of those countries had experienced a decline in their inclusive wealth per capita since 1992, despite the GDP per capita increasing in the majority of them. To illustrate, the average global growth rate of inclusive wealth was 1.8% per year during the period under review, but global GDP growth was 3.4% per year.

“It is clear, then, that GDP is a poor measure of a country’s well-being because a nation’s well-being can decline even though its GDP is rising … This means these countries are not on a path to sustainable development even if their economics, according to GDP, appear to be growing. They are depleting their stocks of natural, human and physical capital at rates that will leave future generations worse off,” says the report.

On the other hand, 123 of the 140 countries experienced a decline in natural capital while achieving an increase in wealth. The decline of natural capital is a global trend. When broken down into different asset classes, produced capital grew at an average annual rate of 3.8%, health and education-induced human capital growth remained at 2.1% while natural capital decreased 0.7% during the period.

“A natural way to interpret this outcome is that produced capital and, to a lesser extent, human capital have been enhanced at the cost of natural capital (unsustainable agriculture and industrialisation, for example, leading to better ports, roads and infrastructure, at least in the short run),” says the report.

The high rate of natural capital depreciation is especially pronounced in low-income economies, where it is five times larger on average than in rich OECD economies. While many of the middle and low-income economies compensate the rising natural capital depletion with other capital investments, the sustainability of development efforts is bound to be damaged and inequality worsened.

“The root of this imbalance (increasing natural degradation and inequality) is that natural capital is underpriced and the resulting proceeds are insufficiently invested in accumulating other forms of wealth, especially human capital,” say the authors.

They argue that if natural capital is being depleted to produce and accumulate wealth, any measure of national wealth that does not take into account natural capital likely exaggerates the actual increase in the economy’s wealth over time. “This suggests that income and wealth inequality may be worsening in rich countries and in the global economy generally. If overall wealth accumulation net of natural capital depreciation as a share of national income is falling while private financial wealth is rising, then the gap between rich and poor will continue to widen in all economies.”

“Not surprisingly, carbon damage as a share of inclusive wealth produces a stronger effect on small countries because their inclusive wealth tends not to be sufficiently large enough to absorb such shocks,” says the report.

Additionally, only 15 countries saw their fishery wealth increase during the period under review while 92 countries reported a decline. Meanwhile, some countries rich in natural capital are running out of it. For instance, less than 1% of the wealth in Bahrain and the UK in 2014 came in the form of natural capital, which may be due to the depletion of their oil capital over the last few decades.

The report includes fossil fuels, which is a non-renewable resource, as a positive natural capital asset although it could be a stranded asset or liability if its social costs are factored in. But the authors of the report made this decision because in an imperfect economy, which is the scenario assumed in the report, people still believe that the benefits of fossil fuels outweigh the drawbacks.

Examples of countries on the IWI

- China’s inclusive wealth index outperformed all other countries because it offset its fall in natural capital by reinvesting in physical and human capital. For instance, its natural capital share fell by half from 1990 to 2010, but its growth in human and physical capital stocks offset those losses.

- It is possible to achieve per capita growth in both GDP and natural capital. Among the 10 countries doing well on this front are Belgium, Armenia, Croatia, Russia and Slovenia. The reason may be due to declining populations, discovery of fossil fuels and improved management of forest resources. Many of them are also experiencing relatively fast growth in produced and human capital.