THE Golden Horse Awards, one of the most prestigious film awards in the Chinese-speaking world, is set to dazzle yet again in its 51 years of celebrating the best film works in Asia.

Rolling out the red carpet tomorrow evening in the National Sun Yat-sen Memorial Hall in Taipei, the awards presentation ceremony is expected to be graced by an array of glittering A-listers from China, Hong Kong and Taiwan.

The organiser has said more than 80% of the nominees across all categories have agreed to attend the presentation ceremony, marking a new record high in recent years.

Gong, 49, who rose to international stardom by starring in Chinese director Zhang Yimou’s films that include Raise the Red Lantern, will be a first-timer at the Golden Horse.

She has been nominated for best lead actress for her role in Chinese family drama Coming Home, a movie set during the era of China’s Cultural Revolution.

The movie, marking her reunion with director Yimou after their last project in 2006, was released in Malaysia in August.

Tang scores a best lead actress nod with her portrayal of a renowned writer in 20th century China in The Golden Era, directed by Hong Kong’s Ann Hui.

Chinese actor Chen Jianbin, meanwhile, is all poised to snap a few “Golden Horses” tomorrow. This is because the veteran actor is nominated for best lead actor, best new director and best adapted screenplay for A Fool, as well as best supporting actor for Taiwan-produced Paradise in Service.

Chen, 44, is no stranger to TV viewers here. His Chinese imperial court drama series, The Legend of Zhen Huan, co-starring Sun Li, was such a hit in 2012 that it also attracted strong viewerships in Singapore, Taiwan and Hong Kong.

Hong Kong Cantopop Heavenly King, Jacky Cheung, will grace the ceremony as a performer. He is belting out his new single, Love with the Rest of My Life, as a salute to filmmakers.

He will be accompanied by a 22-member orchestra consisting of the best musicians from Hong Kong and Taiwan, reported Chinese-language media.

Cheung was quoted as saying: “I have full respect for the Golden Horse Awards, and am honoured to be given the chance to perform at the event. Usually I only get to see fellow artistes when I film a movie. But in an event such as this, I get to meet a lot of people from the film industry. It’s great.”

Last but not least, the line-up for the judging panel this year is equally impressive.

That includes Hong Kong actor-director Stephen Fung, who sits on the judging seat of the Golden Horse Awards for the first time.

The panel, led by veteran Chinese-American actress Joan Chen and consisting of Hong Kong superstar Aaron Kwok, Hong Kong director Stanley Kwan and Taiwanese actor Chen Po-Wen, had to review a total of 38 films in the nomination list and decide the outcome tomorrow.

After making a big bang at the awards last year, Malaysia did not make the cut for any categories in 2014. Singapore and Malaysia made a big imprint in the award’s history by winning best picture (Ilo Ilo), best original screenplay (Ilo Ilo), best new director (Anthony Chen) and best supporting actress (Yeo Yann Yann) in 2013. 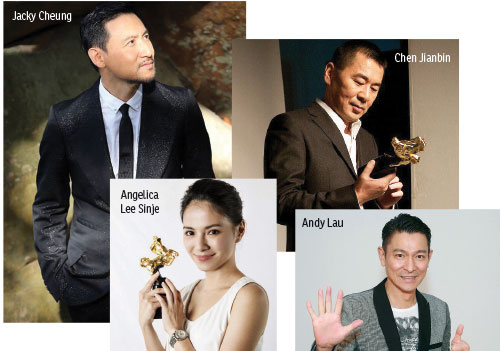