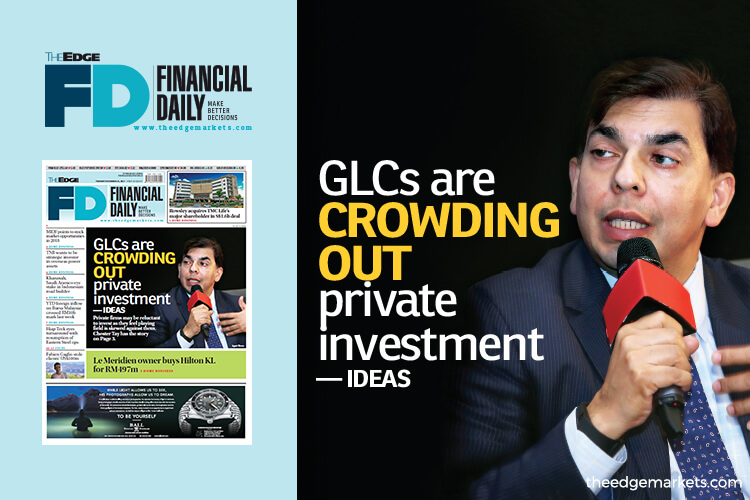 KUALA LUMPUR: The Institute for Democracy and Economic Affairs (IDEAS), a non-profit public policy research institute, is calling for lesser government participation in the country’s business scene as the scenario is putting off private investment.

Menon said GLCs are crowding out the real private investment as they are seen to have preferential access to government contracts and benefit from favourable government regulations.

“An often-cited concern relates to the preferential treatment that they receive with respect to government procurement. They could also enjoy various other benefits, including direct subsidies, concessionary financing, state-backed guarantees, and exemptions from antitrust enforcement or bankruptcy rules,” Menon said.

“Hence, GLCs find it easier and more profitable to increase investment in sectors which they already have a significant presence — a level of involvement usually made possible by their special and preferred status to begin with,” he explained.

Therefore, Menon said private firms may be reluctant to invest in sectors where GLCs are dominant because they perceive the playing field to be skewed against them.

The research also tested whether there is a threshold effect when it comes to the share of the GLC presence in an industry as it is possible private firms tend to invest less when the share of GLC revenue in a particular industry is large.

“The results revealed that when GLCs account for a dominant share (60% or more) of revenues in an industry, investment by private firms in that industry is significantly negatively impacted. Conversely, when GLCs do not dominate an industry, the impact on private investment is not significant,” Menon said.

“Sensitivity tests associated with varying the level of the threshold confirm the robustness of the results. Therefore, for the first time, there is unambiguous empirical evidence of a crowding out effect of private investment in Malaysia due to the presence of GLCs,” he said.

Moreover, Menon said as GLCs receive preferential treatment, it will result in financial burden on the country and rise in crony capitalism. “There has also been a string of government bailouts over the years, resulting in a huge drain on the public purse. Some of the more notable bailouts in the past few years include RM1.5 billion for Proton in 2016, and RM6 billion for Malaysia Airlines in 2014. One estimate suggests that around RM85.51 billion has been used to bail out GLCs over the past 36 years,” he said.

“Hence, GLCs pose a fiscal burden on the country and result in a more expansionary budgetary position than would otherwise be the case,” he said.

On the other hand, Menon said instead of engendering a new class of self-reliant and independent bumiputera entrepreneurs, GLCs have resulted in a rise in crony capitalism, state dependence and grand corruption.

Menon said the vast array of GLCs at the disposal of the government provides the modality to pursue foreign relations through “flexible but questionable” business decision-making.

“In short, it can compromise good governance,” he said.

Hence, Menon recommends the government implement a transparent, time-bound and committed programme of divestment by the GLCs.

“How that commitment can be engendered is admittedly complex, and requires a separate study focusing on much broader issues. But at a minimum, it would seem to require confronting vested interests and addressing the underlying political economy motivations that continue to provide a lifeline for GLCs and allowing them to flourish,” he said.

“Until this commitment can be instituted, the cost of sustaining GLCs will have to be borne by the rakyat,” he warned.