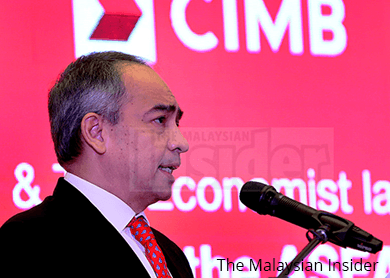 The party's parliamentary leader said the CIMB Group chairman, who is also the prime minister's brother, should have the power to summon offenders and publicly lecture them.

"Probably, the prime minister should appoint Nazir Razak as honorary ombudsman for 'stupid things' by 'Power People' with jurisdiction to summon miscreants to  publicly lecture them for their stupid utterances or acts which undermine Malaysia’s national image," Lim said in a statement today.

He said this in light of Nazir's Instagram post two weeks ago, stating that "power people" must refrain from saying "stupid things" as it would worsen the economy.

Lim said that despite Nazir's warning, those in power continued to issue stupid statements at an accelerated rate.

"Imagine ministers like Zahid, Abdul Rahman Dahlan, Madzir, Ismail Sabri, Salleh Said Keruak, Azalina  and Shabery Cheek getting a public tongue-lashing from Nazir, which I think is probably the best antidote to get them to reduce their quota of 'stupid' utterances and statements," said Lim.

The Gelang Patah MP then listed several Umno leaders who recently made such remarks.

Yesterday, Urban Wellbeing, Housing and Local Government Minister Datuk Seri Abdul Rahman threatened to dump rubbish outside Bersih 2.0's office after its next protest, if it did not pay RM65,000 as clean up costs after its recent Bersih 4 rally.

Minister in the Prime Minister's Department Datuk Azalina Othman said Datuk Seri Ambiga Sreenevasan was "unpatriotic" for setting up an online petition to urge for an emergency parliamentary sitting. – The Malaysian Insider