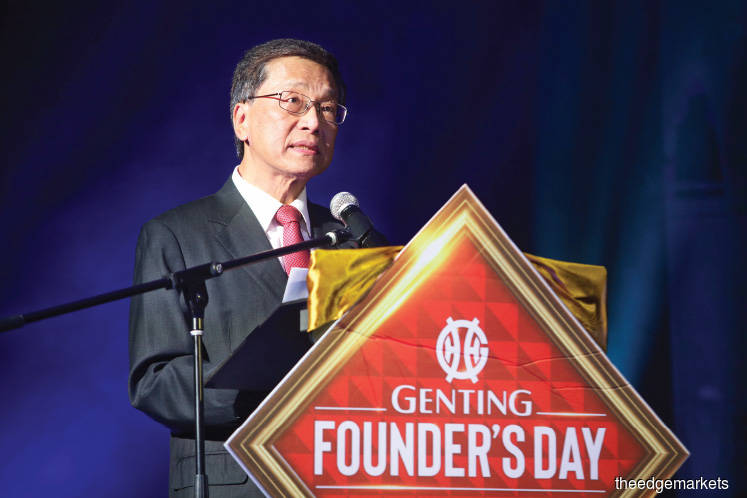 The suit sought unspecified damages and called for a halt to Lim (pic) and GenM’s efforts to take the company private. Photo by Sam Fong

KUALA LUMPUR: An Empire Resorts Ltd minority shareholder is suing the company, its board members and the company’s controlling shareholders — Genting Malaysia Bhd (GenM) and Kien Huat Realty III — for steering the company to go private against other shareholders’ interests.

According to The Times Herald-Record’s website, minority shareholder David Mullen from New Jersey made the claim in a suit filed on Tuesday with the Sullivan County Supreme Court.

Mullen, who is seeking class-action status for minority shareholders, accused Empire Resorts and its board of not providing sufficient information required to assess the privatisation offer jointly made by GenM and Kien Huat. Furthermore, he claimed that the privatisation deal was endorsed by board members who would financially benefit from it.

The suit also claimed that Lim and GenM scared off third-party offers by publicly declaring, via Empire Resorts’ financial filings, that they would not entertain buyout proposals they deemed unsuitable for Empire Resorts, according to Times Herald-Record.

In addition, Mullen claimed that Empire Resorts is deemed undervalued based on the privatisation offer of US$9.74 per share.

The suit sought unspecified damages and called for a halt to Lim and GenM’s effort to take the company private, so that Empire Resorts can reassess its value and seek other offers.

GenM and Empire Resorts representatives were quoted by Times Herald-Record as saying they would not comment on the pending litigation.

Empire Resorts Inc, in which GenM is going to buy a 46% stake for US$128 million (RM538 million), is facing a liquidity problem which is so severe that it has prompted the US-based casino operator to consider voluntary Chapter 11 bankruptcy.

Through a related-party transaction (RPT) that has drawn criticism, GenM bought an effective 35% stake in the cash-strapped Empire Resorts Inc from Lim, who is also its chief executive officer and chairman, for RM538 million cash.

As much as RM3.27 billion of the market capitalisation evaporated from GenM in August as it came under fierce selling pressure since the announcement of the RPT.

Following the share acquisition, GenM and Kien Huat have joined hands to take Empire Resorts private at US$9.74 per share of common stock.