Genting Malaysia to sell 1.5 billion ringgit of bonds in debut 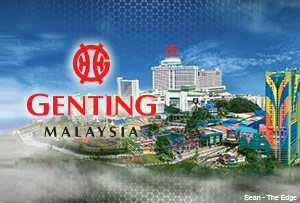 The notes will be sold by GENM Capital Bhd., a company set up by Genting Malaysia to sell debt, and is part of a 5 billion ringgit program, said the people who asked not to be named because the information hasn’t been made public. Five- and 10- year paper will be offered in the week beginning Sept. 29 and there will be an option to increase the sale amount, they said.

Genting Malaysia, ranked at the highest investment grade of AAA by RAM Rating Services Bhd., will use the proceeds of the sale for working capital, the people said. The Kuala Lumpur- based company is tapping the market at a time when corporate borrowing costs in the Southeast Asian nation are near a four- year high after Malaysia’s central bank raised its benchmark interest rate in July.

The average yield on Malaysian top-rated company bonds due 2019 climbed 27 basis points, or 0.27 percentage point, this year to 4.23 percent, according to a Bank Negara Malaysia index. It reached 4.29 percent on Aug. 14, the highest since April 2010.

Parent Genting Bhd., which owns leisure, gaming and plantations companies including Resorts World Sentosa in Singapore and Star Cruises in Hong Kong, last sold bonds in June 2012. The yield on its 4.42 percent notes due 2022 was 4.65 percent on Aug. 6, the last available figure, down 13 basis points this quarter, data compiled by Bloomberg show. Genting’s 4.86 percent securities due 2027 yielded 5.10 percent on Sept. 15, a decline of 29 basis points from June 30.

Genting Malaysia, which bought 6.6 hectares of land in the Bahamas for $25 million last week, has a market capitalization of 24.2 billion ringgit, according to data compiled by Bloomberg. Its shares dropped 1.8 percent to 4.27 ringgit as of 11:31 a.m. in Kuala Lumpur today, compared with a 0.1 percent decline in the benchmark FTSE Bursa Malaysia KLCI Index. Genting Malaysia’s stocks have fallen 8.6 percent since closing at a record high on Aug. 27.