Genomics: Beating diseases to the punch with sequencing 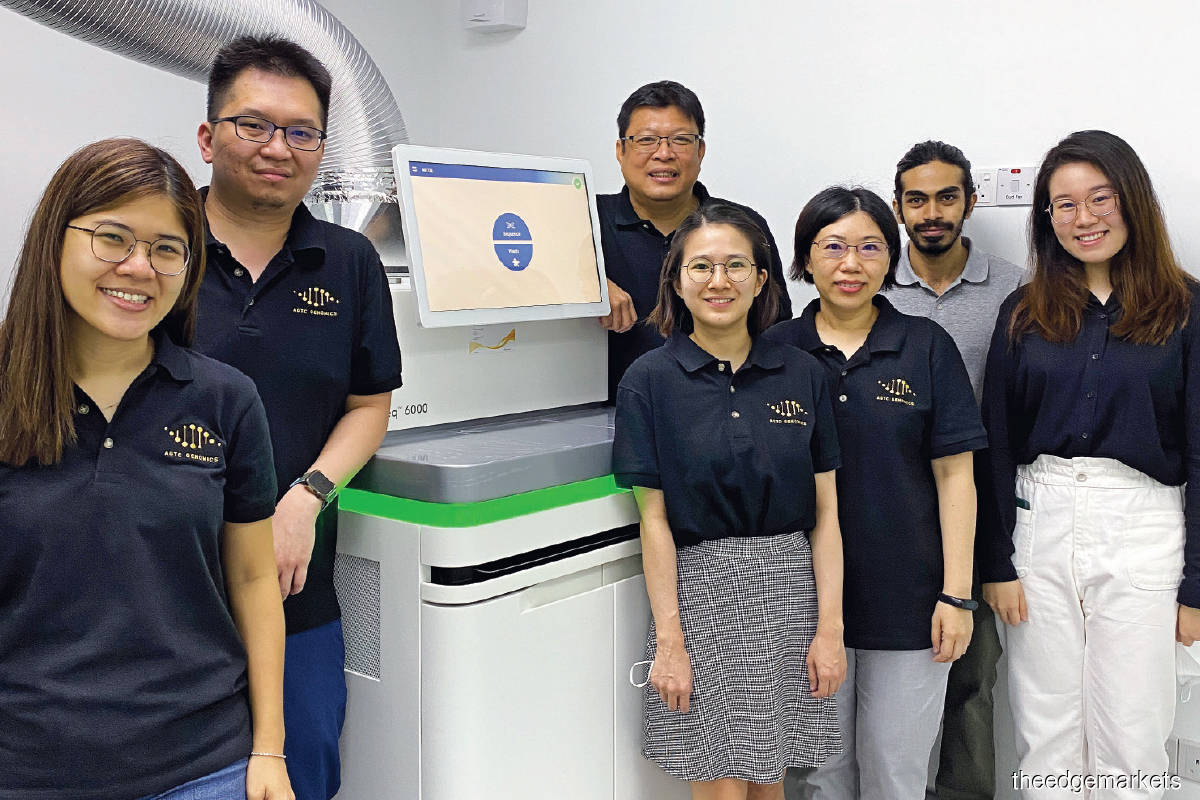 AGTC Genomics’ technology can sequence more than 100 genomes from as little as 2ml of saliva for below US$1,000 in less than 48 hours

Genetic testing is becoming increasingly prevalent in diagnosing, treating and preventing illness. For one, it proved to be most efficacious in sequencing the first SARS-CoV-2 virus — known more commonly as Covid-19 — which took less than 10 days.

This eventually led to the development of detection methods such as polymerase chain reaction (PCR) and rapid test kit (RTK) and, subsequently, the design of the Covid-19 vaccine — all of which have contributed to substantially reducing the burden of disease on the healthcare system worldwide.

But whole genome sequencing (WGS) can do more, especially in identifying the risk of developing certain diseases such as cancer as well as screening and sometimes effective medical treatment, says biologist Dr Chee-Onn Leong, CEO of AGTC Genomics.

The technology makes it easier, faster and cheaper to study human genome, which is made up of about three billion base pairs of DNA — which 15 years ago cost US$3 billion and took 13 years to sequence just one genome. Now AGTC says its technology can sequence more than 100 genomes from as little as 2ml of saliva for below US$1,000 in less than 48 hours.

How does gene sequencing work? Think of DNA as letters in a book and the gene as a combination of letters that make up a chapter. The genome is the compilation of all the chapters of the book. “Most of us don’t really see a doctor until we feel sick. That’s where the problem lies, because a lot of diseases can be prevented before they manifest. The risk of succumbing to diseases like atherosclerosis, heart disease, obesity, type 2 diabetes and even some cancers can be identified and prevented if we knew what kind of lifestyle changes we need to make.

“For example, I found out that my genetic makeup makes me prone to having high cholesterol. Although I take it upon myself to lead a better lifestyle and make the necessary changes, I will always have that susceptible gene, unfortunately. But when this information is used preventively, I will make sure I eat better and routinely go for my medical check-up,” he says.

Chee adds that, for those who are struggling to maintain a healthy lifestyle and stay away from preventable diseases, gene sequencing can save them from going through unnecessary trial and error.

“Beyond this, the information gained from personal genome sequencing can help people make informed family planning decisions or allow people to make arrangements for their future medical care.

“Even patients who have a family history of fatal diseases will be more relieved to know they do not even have the mutation in the first place, and so it will not be passed on to their children.”

Testing has been proven to be particularly helpful for people with a family history of certain types of cancers. Perhaps the most well-known are BRCA — the abbreviation of the breast cancer gene — mutations, which increase the risk of breast, ovarian and several other types of cancer.

“Healthcare providers can access an individual’s genetic code and better determine what sort of treatment is right, leading to better outcomes and lower costs. For example, in the management of lung cancer, conventionally, patients are often required to do multiple genetic tests to determine which treatment is better to target the tumour with minimal side effects. These tests can easily cost up to RM20,000 to RM30,000 and may require up to five tests that are likely to take over a month to find the right treatment,” says Chee.

With the advent of the high-throughput next-generation sequencing technology, however, one will only need to perform one test that will cost less than RM10,000, he says. “You will have the right treatment to target the mutated gene in a week’s time. You can see how time-saving and cost-effective this is.

“Time and cost are critical factors for a cancer patient, and we can’t afford to compromise on any at all. This is critical information that can help save lives but, in Malaysia, the common practice of having patients go through multiple tests remains. It is incredibly tedious and cost-prohibitive,” he says.

Moreover, in pharmacogenomics — the study of the role of the genome in drug response — WGS shows how our bodies metabolise and respond to drugs.

“Our genetic makeup can actually affect how certain medicine is metabolised. So, in some instances, some medicines can be less effective or I could be terribly allergic to them, which is why I believe one of the most promising benefits of genomics and precision medicine is the promise of therapies that are tailored to meet each patient’s specific needs,” says Chee.

Nevertheless, such information can weigh heavily on people’s minds. While he recognises that the knowledge may induce stress and anxiety, especially if test results return inconclusive or uncertain, he believes that, in the long run, it will be beneficial in helping individuals gain a greater understanding of their health and promote awareness of genetic diseases.

“A lot of people are afraid of what they might find out. Often, they feel that some things are better left unknown. That’s human nature.

“But having said that, knowing that our genes makes us predisposed to certain diseases can help in mitigating the risk of falling seriously sick. This is why WGS is such a powerful tool,” says Chee.

To lessen the impact, AGTC has an in-house genetic counselling service that works with affiliate hospitals to guide individuals through the process.

According to Global Market Insights (GMI), the US direct-to-consumer genetic testing market accounted for a revenue share of more than 91% of the North American industry in 2017. The growth is attributed to the rising incidences of genetic diseases in the country, high awareness among people regarding genetic testing as well as technological advancements.

Globally, the direct-to-consumer genetic testing market surpassed US$1.4 billion in 2021 and is expected to witness a 15.3% compound annual growth rate (CAGR) from 2022 to 2028, adds GMI.

But Malaysia is lagging behind, says Chee. “We seriously lack the appropriate technical expertise in this field. Most of our genomics research in Malaysia is outsourced to developed countries such as Singapore, South Korea, China, the US and the UK.

“This is an alarming trend because most of the genomic information about our population and biodiversity is now being held on sovereign lands and our over-reliance on ‘outsourcing’ has led to a lack of local talent development in this field,” he says.

“Malaysia has yet to embark on a concerted effort to launch its own MGP (Malaysian Genome Project), despite our rich heritage and diversity.”

Now that the facilities to sequence an entire human genome — or any genome, for that matter — are available, Chee hopes the country starts deciphering the local human genome soon.