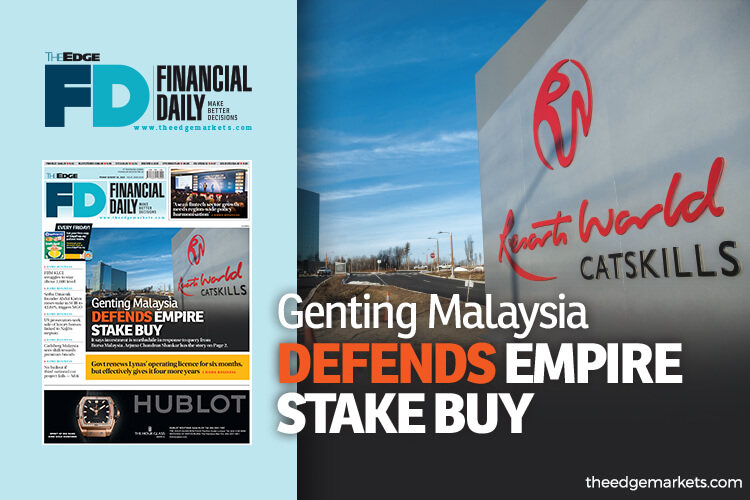 Genting Malaysia said this in a filing yesterday after Bursa Malaysia queried the gaming group to confirm or deny the contents of The Edge Financial Daily’s article, entitled “Empire Resorts on the brink of filing for bankruptcy”, which was published on Tuesday.

The group said Empire is having liquidity problem and the proposal made by Genting Malaysia and Kian Huat Realty III to take the ailing US-based casino operator private is an alternative to address its financial problems.

Genting Malaysia also defended Empire’s casino resort, Resorts World Catskills (RWC), which is located 90 miles (144.84km) from New York City, saying it is one of the newest and highest quality gaming assets in northeast US, with more than US$900 million (RM3.77 billion) invested.

“It is one of the closest gaming facilities to New York City offering live table games, including baccarat and blackjack,” the group said.

Genting Malaysia, whose shares have come under strong selling pressure after the group announced it is to acquire a 35% stake in Empire from its controlling shareholder Tan Sri Lim Kok Thay, explained that RWC is part of a development that includes the US$200 million Kartrite Resort, which the group described as “one of the most modern and state of the art indoor waterpark developments” in the US. The project includes 324 new all-suite luxury rooms.

Genting Malaysia added that it is in a unique position to take advantage of synergies between its existing Resorts World New York casino and RWC, thus providing the two casinos economies of scale, which will see costs reducing and earnings rising.

Furthermore, Genting Malaysia said the group will be able to leverage customer bases of both casinos to form a combined marketing approach that is expected to maximise gaming revenue while improving margins.

“RWC is in a favourable position to take advantage of the emerging sports wagering market in New York. Empire is opening an on-site sportsbook and is in a prime position in the eventuality of the enactment of mobile sports betting,” Genting Malaysia said in the filing.

In addition, Genting Malaysia said RWC has the opportunity to develop a video lottery facility in Orange County, New York, which is adjacent to Woodbury Commons — a premium outlet shopping mall.

“Successful execution of the proposed merger would place Genting Malaysia in a position to access more deeply into the New York market and provide both Genting Malaysia and Empire the opportunity to compete more effectively in northeastern US region’s current competitive gaming landscape,” said Genting Malaysia.

It added that the acquisition allows for Empire to complete its projects and embark “on a path to stability and growth for the benefit of all stakeholders”.

In a separate filing with Bursa, Genting Malaysia revealed that Empire had posted an accumulated net loss of US$212.4 million since RWC’s casino commenced operation in February last year.

To recap, Genting Malaysia announced on Aug 6 that it is going to buy a 35% stake in Empire from Kien Huat, which is Lim’s investment vehicle that currently controls 84% of the debt-laden company.

The RPT does not require shareholders’ approval.

Genting Malaysia’s share price has tumbled 15% since the RPT announcement, while its parent company Genting Bhd has slipped 9.2%, with billions of ringgit worth of market capitalisation wiped out from the two companies.