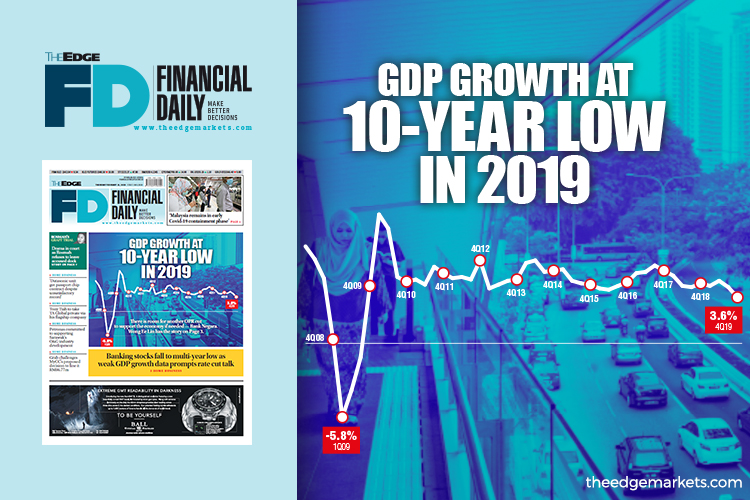 In the event of any challenges to economic growth moving forward, Nor Shamsiah said the country has ample room for a further reduction in interest rate as inflation still remains at a low level.

And barely a month later, OCBC Bank Research, for one, expects that “there is a distinct possibility for BNM to cut rate again, and soon, in the next meeting on March 3”.

Nor Shamsiah told a media briefing yesterday Malaysia’s GDP growth moderated to 4.3% in 2019 — the lowest level since the global financial crisis in 2009 (according to a rebased constant of 2015), compared with 4.7% growth in 2018.

Nor Shamsiah explained that the annual growth in 2019 was adversely affected by supply disruptions, especially in the commodity sector, while growth was supported by resilient private sector spending and continued expansion in the services and manufacturing sectors.

According to BNM statistics released yesterday, the agriculture sector contracted by 5.7%, from a growth of 3.7% in 3Q19, while the mining sector saw slower decline of 2.5%, versus 4.3% in 3Q19.

The contraction in the agriculture sector was due to the severe dry weather conditions affecting palm oil yields and cutbacks in fertiliser application during the early part of 2019. Mining sector growth declined at a slower pace, reflecting a smaller drop in oil production as output gradually recovered from major maintenance work that was done in the previous quarter.

Headline inflation, on the other hand, moderated to 1% in 4Q19, from 1.3% in 3Q19 as the impact of the sales and service tax (SST) implementation lapsed. Fuel inflation continued to have a negative contribution to inflation, as domestic retail fuel price ceilings were maintained.

Core inflation was stable at 1.4% for the quarter, versus 1.5% in 3Q19, amid the absence of strong demand pressures and moderate expansion in private sector wages, said Nor Shamsiah.

‘Covid-19 outbreak to weigh on growth’

While, at this juncture, it is “too hard to predict” the impact of the Covid-19 outbreak on the country’s economic growth moving forward, Nor Shamsiah said economic growth will be affected by the crisis, particularly in 1Q20.

“[The] overall impact of the virus on [the] Malaysian economy will depend on the duration and spread of the outbreak as well as policy responses by [the] authorities,” said Nor Shamsiah, adding that should the virus outbreak be contained in the near future, “the impact would not be severe”.

“As we have a diversified economy ... one sector may be more affected than another. But then again, because of the diversified nature of our economy, other factors will be able to cushion the impact of the coronavirus (Covid-19) on selected sectors of the economy,” she added.

Looking forward, Nor Shamsiah noted that the central bank will be revealing its forecasts for 2020 GDP growth on March 25, in conjunction with the release of BNM’s annual report.

She said that the country’s economy is expected to remain supported by private spending, resumption of large infrastructure projects that is expected to contribute around one percentage point to growth, recovery in commodity production and operationalisation of new facilities as well as modest improvement in global trade activities.

Some downward risks to economic growth highlighted by her are prolonged Covid-19 outbreak, re-escalation of trade dispute and continued supply disruptions in the commodities sector.

Meanwhile, the central bank is projecting the headline inflation in 2020 to average higher than in 2019, but remain modest, adding that the trajectory of headline inflation will be dependent on global oil and commodity price developments and the timing of the lifting of the domestic retail fuel price ceilings.

“Underlying inflation is expected to be broadly stable, reflecting the continued expansion in economic activity and the absence of strong demand pressures,” Nor Shamsiah said.

‘Ringgit to take its cue from external factors’

As the ringgit appreciated 1.1% against the US dollar last year, the governor said the local currency will continue to be influenced by external developments in 2020.

As at the time of writing, the ringgit was trading at 4.1368 against the greenback. Year-to-date, the ringgit has weakened 3.96%.

“The ringgit, against the major trading partners, has been very stable. Our role is to ensure that any volatility in the currency is not excessive to disrupt the economic activities,” she said, adding that the ringgit is now still moving in tandem with the trend of regional currencies.