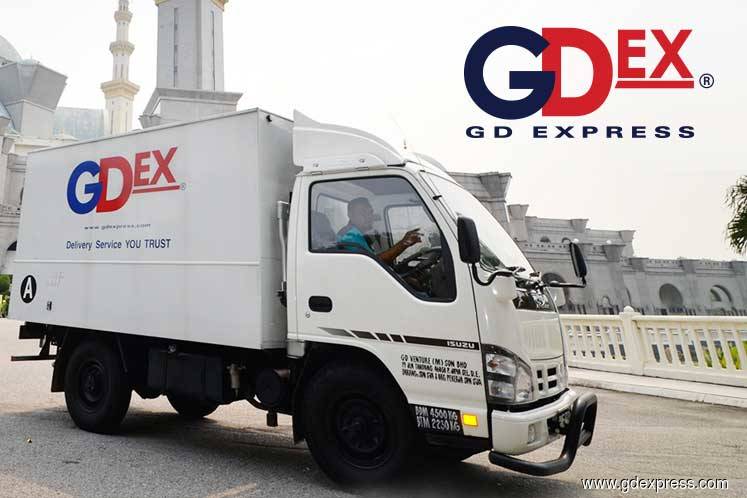 KUALA LUMPUR (Feb 26): Shares in GD Express Carrier Bhd (GDex) surged as much as 21.3% or 6.5 sen in active trade today, after the company posted a 62% jump in its latest quarterly net profit.

At 2.35pm, GDex was traded at 35.5 sen — still up five sen or 16.4% from its Monday close — for a market capitalisation of RM1.81 billion. It gained in an overall negative market breadth, where decliners outstripped gainers at 607 versus 227, while 282 counters were unchanged at the time of writing.

With a total turnover of 33.35 million shares, GDex came in fourth on Bursa Malaysia's top active list at the time of writing.

In view of GDex's strong 2Q results, MIDF Research revised upwards its target price from 28 sen to 33 sen, while keeping a "neutral" call on the stock.

"GDex's first half of financial year 2019 (1HFY19) normalised net profit increased by 18.5% year-on-year to RM17.2 million. This came in better than our expectations, representing a variance of more than 5% as compared to our 1HFY19 earnings estimates.

"As earnings came above expectations, we are prompted to revise our FY19 and FY20 earnings forecasts upwards to RM29.1 million and RM33.9 million respectively," its analyst Adam Mohamed Rahim wrote in the note today.

The higher target price, he said, assumes a weighted average cost of capital of 11% and a higher terminal growth rate of 2.5% to reflect GDex's growth in the Southeast Asian e-commerce industry, which is expected to be worth US$102 billion by 2025.