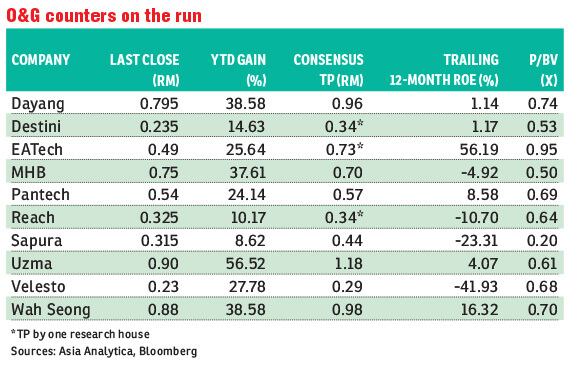 However, the backdrop is eerily similar to 2018 — Opec extended production cut, which lifted oil prices and consequently the O&G counters regained some shines, share prices rebounded from multi-year lows.

Just when the world was convinced that the crude oil prices were out of the doldrums, they actually made a sharp U-turn towards the end of last year. And that trend reversal pushed share prices in O&G firms on Bursa Malaysia to all-time lows. Many were trading at below 50 sen.

Now, crude oil prices are on climbing again. Is there risk of another roller-coaster ride?

US, Iran in the spotlight

Opec’s production cut of 1.2 million barrels ends in the first half of 2019 (1H19), pending an extension review in April. Meanwhile, one may look to the US and Iran to get a hint on where oil prices may be headed.

The slump to US$50 (RM204) per barrel (bbl) in December 2018 was led by the US granting waivers for 180 days to several countries for its ongoing sanctions against Iran, pointed Thomson Reuters Asia oil research & forecast director Yaw Yan Chong.

“If they are not [extended beyond mid-2019], then I would expect prices to go higher, probably above US$70/bbl; and the reverse if they are,” Yaw told The Edge Financial Daily in an email reply.

The other factor is US oil production, which has been “soaring at record-high levels”, he said.

“The expectation is that [US production] will hit 13 million barrels per day (bpd). That would make them the world’s largest producer, well above Russia, the current No 1 at around 11.5 million bpd,” he added.

In hindsight, Brent averaged US$71.34/bbl in 2018 despite the high volatility. A Bloomberg survey among analysts in December estimated the benchmark to average US$70. At home, Petroliam Nasional Bhd has planned its operations in 2019 at US$60-70 per bbl Brent.

Aside from oil price movements, weak earnings, which came in below expectation, also turned investors away in 2H18. But an analyst with a local bank opined that earnings for those with healthy order book are en route to recovery.

An example is Dayang Enterprise Holdings Bhd, which returned to the black in financial year ended Dec 31, 2018 (FY18) on higher work orders received.

Similarly, Petra Energy Bhd’s FY18 losses shrank by half after a profitable fourth quarter, thanks to higher work activities.

The key takeaway, said the analyst, is that jobs that were won but halted following the 2015 downturn are finally contributing to companies’ bottom line.

“Dayang was loss-making in FY17, with no contribution coming in at the time,” said the analyst. “They won several contracts last year, but the latest earnings are from the contracts prior to that. The activities are finally coming in.”

Dayang’s results may also give hope that companies are getting used to the new norm of US$60-70 bbl Brent.

“Most counters were trading below fundamentals back in December, and many still are,” added the analyst.

Of the 35 counters involved in the upstream segment tracked by The Edge Financial Daily, 27 were trading below book value as at last Friday’s close.

Among them, 20 companies’ return on equity (ROE) is in negative zone for the trailing 12-month period compared with 15 with positive ROE. Still, some loss-making companies are rated “buy” by analysts, considering the potential upside when the contracts translate into actual work orders.

Still, one analyst at a foreign investment bank opined that it is too soon to tell whether an industry rerating is due. “Similar trend also happened in 2016,” he recalled.

“Share prices climbed early in that year following Opec’s announcement of a production cut, but earnings disappointed — and stocks fell to new lows then,” the analyst said.

For certain asset-heavy companies, the upcoming quarterly results could also be affected by impairment, albeit at the tail end and with smaller quantum expected.

This does not bode well for sentiment, which is highly sensitive following the unexpected price slump last year.

“For the climb to be sustainable this time around, companies need to show profit stability over several quarters,” the analyst said.

Regardless of the risk appetite of investors, the sector is definitely garnering more attention by the day as the crude oil prices continue to gain strength.