THE awards season kicked off on Sunday in Los Angeles with the 72nd Golden Globes Awards. Here’s a look at some of Tinseltown’s fashion hits and misses at the event recognising the movie industry for its work. 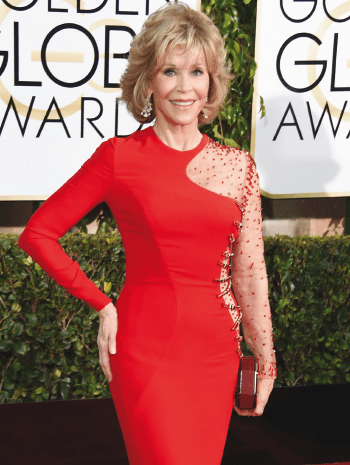 Ladies in red
Veteran actresses Dame Helen Mirren and Jane Fonda both donned classy, red numbers that gave most of the young attendees at the event a run for their money. Wearing a figure-hugging Dolce & Gabbana frock, Mirren once again proved that timeless beauties never grow old in Hollywood, and that you can keep it glamorous while being age-appropriate. Fonda, who just turned 77, graced the red carpet in a long Versace gown, and was among the stars who completed their look with Bvlgari accessories. Actresses who also came for the kill in red were Catherine Zeta-Jones and supermodel Heidi Klum, who wore Donna Karan and Atelier Versace respectively.

All glitz and glam
What better way to stand out in a sea of famous faces than to outshine them (quite literally) with your outfit? The metallic fad never seems to go out of style in Tinseltown. At every major award show, there is sure to be a handful of stars wearing gleaming gowns and the 2015 Golden Globes did not disappoint. From Reese Witherspoon to Julianne Moore, the red carpet was dotted with eye-catching shimmery ensembles. Witherspoon, who has been constantly praised for her red-carpet style, rocked a glistening Calvin Klein gown. Moore, who snagged the Best Actress award for Still Alice wore a glittering Givenchy Haute Couture dress. Actresses Kate Beckinsale (in an Elie Saab Couture number), Atelier Versace-dressed and Piaget diamond-dripping Jessica Chastain, and pop icon Jennifer Lopez who chose a Zuhair Murad caftan, also dazzled in their shiny numbers.

Tuxedo hotties and notties
Let’s not forget the men, who may be less at risk at making fashion faux pas given their only suited attire is a tuxedo. Best Supporting Actor in a Series, Miniseries, or Television Film winner Matt Bomer in his royal purple Ralph Lauren Black Label suit was voted by GQ as the best-dressed man of the night. Following his lead was Adrian Brody’s all black Givenchy suit. Hollywood heartthrob Matthew McConaughey also opted for a purple tuxedo, though his rather rugged, dishevelled beard took away the classy attempt at donning the three-piece Dolce & Gabbana outfit. Jeremy Renner chose to combine refinement and pleasure with the Master Ultra Thin, and Ironman Robert Downey Jr chose the Jaeger-LeCoultre Duometre a Quantieme Lunaire.

A pop of colour
Several stars paraded the red carpet donning bright hues. Oscar-winner Lupita Nyong’o earned another style nod for her white-and- purple, floral-themed Giambattista Valli strapless number. Not far behind on the style-scale was Naomi Watts, who donned a simple, yet stunning sunshine yellow Gucci dress that was cinched in the waist by a silver buckle. Following in their leads by rocking their bold ensembles were actresses Maggie Gyllenhaal and Amy Adams, who were both Golden Globe Award-winners.

Black and bold
All eyes were on Mrs George Clooney, and while the famed lawyer did not disappoint in her cross-shoulder Dior gown, she did, however, raise more than a few eyebrows with an unusual pairing of long-white gloves to complete the look with her stunning frock. Pop teen icon Lorde’s three-piece black pantsuit by American designer Narciso Rodriguez also received the thumbs up, proving an elaborate gown is not a must to rock an awards show. Laura Carmichael and Joanne Froggatt were also among the list of celebs that came dressed to impress in black frocks, as were Jennifer Aniston and Gina Rodriguez.

Fashion miss-tas
An awards night is incomplete without some jaw-dropping moments. Where there are hits, there will also be misses and Hollywood will not be Hollywood without some risk-taking, fashion-backward celebs. Leading the worst-dressed list is funny woman Melissa McCarthy. The 44-year-old wore a confused-looking monochrome long black skirt and white blouse, which she said “were sewn together from pieces from my closet”. The mismatched ensemble featured what looked like a bow adorned in sequins. Also making the cut on the list were Brits Rosamund Pike’s ill-fitting white Vera Wang number, as well as Keira Knightley’s Chanel butterfly print layered dress. 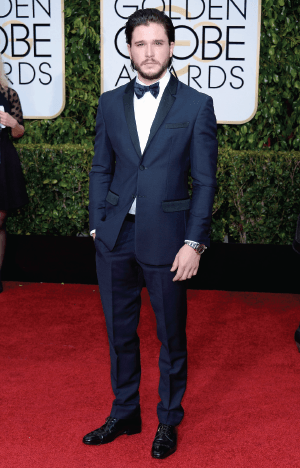 This article first appeared in The Edge Financial Daily, on January 15, 2015.