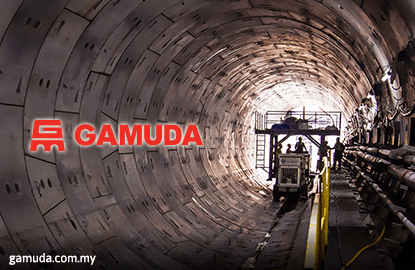 KUALA LUMPUR: Gamuda Bhd, whose share price hit an all-time high yesterday, reported a 4% growth in net profit in its second financial quarter ended Jan 31, 2017 (2QFY17) to RM166.26 million from RM160.11 million a year ago, as it registered higher revenue.

It also attributed the better earnings to cost savings enjoyed from the near completion of underground works of the Klang Valley mass rapid transit (KVMRT) Line 1.

Quarterly revenue jumped 62% to RM853.88 million from RM527.43 million a year ago, mainly due to higher work progress of underground and elevated works of the the KVMRT Line 2 (Sungai Buloh-Serdang-Putrajaya).

Its property division posted a 43% year-on-year (y-o-y) rise in revenue in 1HFY17 to RM515.08 million from RM359.31 million, mainly attributed to the higher sales of its Vietnam properties. However, the segment still saw a 15% y-o-y fall in profit before tax (PBT) to RM84.05 million, due to softening of the Malaysian property market.

As for its water and expressway concessions division, Gamuda said revenue gained 16% y-o-y in 1HFY17 to RM246.76 million, while PBT grew 7% to RM217.19 million, mainly from toll-rate hikes at certain expressways.

On prospects, Gamuda expects to post a good performance this year on the steady earnings of its expressway concessions, and the ramping up of works for KVMRT Line 2.

“The property division’s performance is expected to pick up in the next few quarters due to the launches of several new projects in Malaysia and overseas. The construction unbilled order book as at Jan 31, 2017 was RM8.3 billion,” it added.

It also updated that KVMRT Line 1 was at 98% completion as at end of February 2017. “Phase 1 was completed two weeks ahead of schedule on Dec 15, 2016 and full completion is expected by July 2017, with no significant cost overruns so far. Commencement of Phase 2 trial operations remains on target for May 1, 2017.”

On the Penang Transport Master Plan, Gamuda said the final Environment Impact Assessment report will be submitted to the Department of Environment for its review and approval next month.