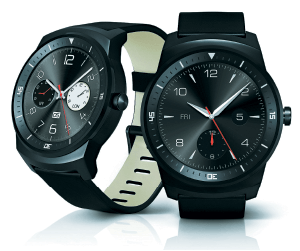 IT’S Milan Fashion Week, you’ve got tickets to the catwalk shows and an outfit to die for, but which watch to wear? A chunky smartwatch or chic ticker that can’t tell the time?

Ahead of the hotly-anticipated Apple Watch launch this year, expected to revolutionise wearable technology, there are already watches you can use to check email, Facebook or the weather, play games or even get your kettle to boil.

Purists might say such a gadget would only distract from the delights of watching Prada, Versace or Armani, but critics and buyers are notoriously bad-mannered anyway, often texting or taking selfies in shows, so they might as well be on their watches.

Bare wrists have been all the rage at Milan’s autumn/winter 2015 shows, but that accessory the fashion world had dropped as one less thing to worry about is now making a comeback.

With the rise of the smartphone a decade or so ago came the demise of the ordinary watch — its rebirth is said to have begun nearly three years ago with Pebble, which created one of the world’s first official smartwatches.

That sparked a flurry of activities which will result this year in items on the must-have geek list such as the Puls, built on the Android system, and the Activité Pop for exercise fiends.

But smartwatches have already drawn criticism for being bulky and, with no serious fashionista willing to look nerdy, watchmakers and technology developers have been racing to find a way to win over the female market.

Successes so far have been thin on the ground, with the most notable attempt coming from Ornate, whose Lutetia smartwatch claims to be just the ticket for women — but the raffish beaded wristband risks falling flat with high-end customers.

Some companies, like Italian start-up D1 Milano, have decided to sidestep the techno race and salvage the watch by transforming it into a purely aesthetic accessory.

Amid the bustle of shows, D1 unveiled what it claims is the world’s first thermochromic watch, which changes colour as the room temperature inches up.

A sleek black which transforms into a green or grey camouflage pattern, the watch — brainchild of 22-year-old designer Alessandro Pedersoli and his three co-founders — is selling well in the Middle East in particular.

Thermochromic ink first appeared on the fashion scene in the 1970s with mood rings — which claimed to show the wearers’ emotional state by reading their body heat — before the technology moved to T-shirts and shorts in the 1990s.

Having the world know you were sweating because blotchy patches appeared under your arms, back and crotch proved a trend killer however.

Instead of ink, D1 is using resin — the stuff usually used on factory pipes as a warning system against overheating — which it has adjusted to react at 27°C, when it becomes transparent to reveal the pattern beneath.

The company’s next project will be to bring out new versions of their octagonal-faced tickers twice a year, in line with both the spring/summer and autumn/winter shows — ideally anticipating some of the trends on the catwalks.

It is too soon to say whether fashion’s finest will be hooked, but they will still have to rely on their phones, because these watches may be pretty but they’re not designed to tell you the time. — AFP